Leaving Senate, but Not The Fight

​Perhaps no lawmaker has packed a more powerful punch for NIH throughout a career in Congress than Sen. Barbara Mikulski (D-MD). As she prepares to depart the legislative body this term as the longest-serving woman in its history, Maryland’s senior senator visited campus Apr. 11 for a town hall meeting that was part “farewell,” part “not finished yet.”

“We can talk about the past, but it is the past,” Mikulski said. “Though I want to savor the past, I want to focus on fighting for the future.”

Once again, she vowed to work her earrings off “so that the last appropriation for the NIH under Barbara Mikulski’s watch is going to be the best damn appropriation you’ve ever seen.

“I want to be sure that we get the right resources going in the right direction so that you get to do you,” she noted. “That’s been my passion for the time I have represented you. My single goal was to let you be you, so that you could come up with the cures and the breakthroughs, the new ideas, the new science that would help the American people and people all around the world.”

Last year—serving in her fifth term in the Senate—the lawmaker recalled the decision she had to make.

“It takes 2 years to run in an election and 6 years to serve,” she said. “How did I want to spend those 2 years—working to keep my job or worrying about your job and the American people? Was I going to spend my time worrying about the next election or the next generation? What was I going to do—raise money for me or raise hell for you? That’s when I said, I want to raise hell for you! I want you to know that although I won’t be running for office, I won’t be running from service.”

“NIH has been fortunate to have such a fierce champion on our side and NIH is a better place because we’ve been challenged to work hard to live up to Sen. Mikulski’s standards,” said NIH director Dr. Francis Collins, opening the town hall meeting.

In brief remarks at what she has often referred to as the “National Institutes of Hope,” the dean of Senate women said, “Serve is in my DNA. If you take the sample, take the swab, you’ll find the serve gene.”

She spent several moments reminiscing about some of NIH’s best known research accomplishments during the years she has represented the agency in Congress.

Saluting Collins, she recalled with pride his victory on behalf of the U.S. in the race to map the human genome.

“A rich nation could have found a way to map the code,” she acknowledged, “but a great nation like ours gave the information to the world.”

At NIH multiple times over the years, Mikulski is shown in the halls of the Clinical Center talking to NIAID director Dr. Anthony Fauci in 1987.

She recognized NIAID director Dr. Anthony Fauci for leading efforts that now have made “HIV/AIDS a chronic condition rather than a death sentence.”

And acknowledging what she likely considers her crowning achievement here—her efforts to ensure that women are represented in all aspects of biomedical science, as investigators as well as volunteers in clinical research—Mikulski warmly greeted a familiar face who surprised her at the town hall: Dr. Vivian Pinn, former director of NIH’s Office of Research on Women’s Health, now retired, had returned for Mikulski’s visit.

The senator fondly remembered how the concept of ORWH was formed.

In the early 1980s, she and other lawmakers were learning that much of the current knowledge about health and disease might not accurately apply to women because females had been excluded from participating in the majority of research trials.

Mikulski recalled an encounter she had with pioneering surgeon and medical consultant Dr. Edgar Berman of Baltimore, who tried to explain why women had been left out of so much clinical research: “You girls have those raging hormones,” he told her.

Mikulski also reminisced about past triumphs at NIH, including success of several gender equity initiatives with the late Dr. Bernadine Healy (l) and then-ORWH director Pinn, shown in 2010.

Mikulski said she replied, without missing a beat, “We have those raging hormones because of guys like you!”

The Masur Auditorium crowd erupted in laughter and applause.

Not long after the Berman conversation, Mikulski—one of just two women in the Senate at the time—joined with HHS and NIH leadership to plant the early seeds for what would become ORWH.

Mikulski phoned the former director shortly before she died, and in the course of the call, noted that the WHI the two helped orchestrate had resulted in a 12 percent decrease in deaths from breast cancer.

“Her last words to me were, ‘Wasn’t that great? We saved lives a million at a time,’” the senator recalled.

Unwilling to rest on past laurels, however, Mikulski emphasized that as good as previous victories are, she’s not done fighting yet. She has, she said, a strategy for her remaining time in office.

As she first revealed at an appropriations hearing just days before her NIH visit, Mikulski outlined three guiding principles for her final funding negotiations as U.S. senator:

“First, do no harm,” she roared, in her signature plain terms. “What I mean by that is no [government] sequestration, no shutdown, no slam down! Let’s get our job done! You do your job—we need to do ours. If we can be half as good as you, we will find a cure for this political toxicity!”

In addition to one-of-a-kind “National Institutes of Hope” guitar pick-shaped earrings, a plaque featuring a golden Petri dish was presented to Mikulski by NIH director Dr. Francis Collins in recognition of her outstanding support of medical research over a 30-year career in Congress.

Next, she said, she wants to “capitalize on existing programs”—the BRAIN Initiative, Precision Medicine Initiative, efforts for young investigators. “We need to make sure that what you’re doing gets funded. You need something that’s reliable, undeniable, sustainable, don’t-screw-with-it, keep-it-going—and that’s exactly what we’re going to do.”

And finally, she said, we want to identify new money for new ideas. “Let’s see if we can find bonus money so that you get a bigger shot at the [Cancer] Moonshot and all of the other great things you’re working on.”

Mikulski ended by reemphasizing her concern and support for young people and the next generation. She endorsed STEM education initiatives for all age groups, particularly middle school kids, and proposed term limits on student loan debt.

Acknowledging that when she came to the U.S. Senate, she had a rotary telephone and a typewriter, Mikulski marveled at the tremendous changes over the years.

“Who would’ve known the dawn of the Internet? Who would’ve known the dawn of the genome? We want continuous dawns,” she concluded. “We don’t want twilights of our future and our future opportunities…No matter where I go, no matter what I do, I’m going to continue to be your advocate all the way up to my last hours in the U.S. Senate, and then after that, I’ll find a way to have my say...You can count on that. I will never ever forget you.” 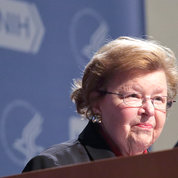 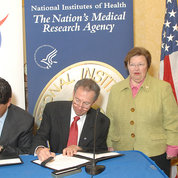 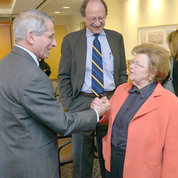