NIH’ers Bike to Work in Droves, Once Again

NEI’s Dr. Brian Brooks clearly has the right attitude about riding in BTWD.

Only one thing has to happen for Bike to Work Day to be a success at NIH, because all the other stuff—the preparation, the enthusiastic participation, the free T-shirt stand, the bagels, juice and coffee—have already been taken care of by the NIH Bicycle Commuter Club and the ORS Division of Amenities and Transportation Services. And that is for the sun to come out.

So rare in May skies was the sun in 2016 that the first thing saluted by Dr. Vernon Anderson, president of the NIHBCC, in brief remarks May 20 from the steps in front of Bldg. 1, was the lovely day.

His second salute was to this year’s winner of the fifth annual Carl Henn Award, presented in memory of the longtime NIH’er and local bicycling activist who died in 2010.

Peter Chines, a computer scientist in NHGRI’s molecular genetics section, won this year’s honor. A daily bike commuter for the past 8 years—he used to take the bus but realized that biking was “much more fun”—he was cited by former NIHBCC president Angela Atwood-Moore for a multitude of virtues.

“Peter serves so quietly,” said Atwood-Moore. “He just does what needs to get done without fanfare. All have benefited from his championing of the Bike Bucks program. He rides, logs his miles and is one of the most visible cyclists on the road.”

Atwood-Moore used to run the Bike Bucks program, but did it manually. Chines automated the program and revitalized participation.

“That really has kept it going,” said Atwood-Moore. “Peter is always thinking about how to make it better and get more people to participate.”

To win a Henn Award, a cyclist needs nominations. Atwood-Moore said Chines distinguished himself on a number of grounds. “I’ve seen him whip out shears and lop off nuisance growth that most other cyclists just pass by,” she said. Chines is also known for organizing cold-weather Polar Bear rides during the winter, to keep up bike commuters’ spirits.

“He just does things simply, efficiently and quietly,” she concluded.

“I am honored and humbled,” said Chines. “I just continued the things folks before me have done to make bicycling at NIH so much better than it was before.” He cited bike storage facilities, the availability of showers and “a very supportive administration” as major campus bike commuter assets.

“[Chines] has been a steadfast member of the club forever,” said Joe Cox, ORS’s chief of transportation services. “He has kept the Bike Bucks program alive over the years.”

Bike Bucks invites riders to log their commuting miles and earn coupons worth cash at a variety of vendors. Learn more at www.nihbike.com/home/bikebucks.

Also on hand at the Bldg. 1 BTWD pit stop were representatives of what Anderson called “our friendly neighborhood bike shops,” including Silver Cycles and The Bicycle Place, which offered raffle items and minor bike repairs. The Takoma Park Co-op contributed food and the Washington Area Bicyclist Association, which sponsors BTWD locally, had an information table.

Dr. Maya Lodish and her daughter Talia Zimmerman, age 4, biked in together. Lodish is a staff clinician and directs NICHD’s pediatric endocrinology fellowship.

Another amenity this year was a parked NIH shuttle bus outfitted with a grill-mounted bike rack. Anderson said it offered cyclists an opportunity to practice getting bikes on and off the racks.

NIH also sponsored two other BTWD pit stops, one near NCI-Shady Grove and the other at Rock Springs Business Park. According to the Metropolitan Washington Council of Governments, the final count was 601 NIH participants, including 466 at Bldg. 1. This was down slightly from 2015, when NIH had 617 registered participants.

“I believe people who normally start cycling in April haven’t got in the spirit yet because of all the rain and cool weather,” said Cox. “Hopefully it will pick up.” 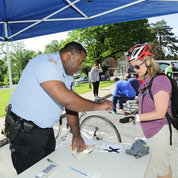 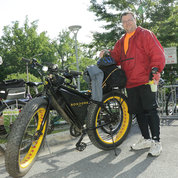 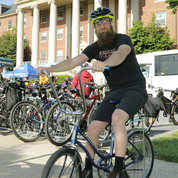 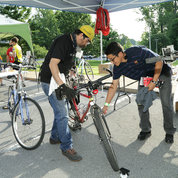 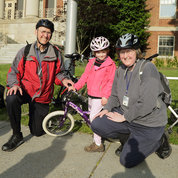