U.S. Sen. Mark Warner (D-VA) made a surprise guest appearance at the NIH Director’s Awards Ceremony on July 19. On campus for an afternoon tour and science briefing, the lawmaker asked to address the assembly briefly after learning that the awards program would be held at the same time as his visit.

At the event, NIH director Dr. Francis Collins introduced Warner as a constant and loyal friend of scientific research and NIH in particular. Warner thanked Collins and congratulated awardees for their outstanding accomplishments. The senator noted that he’s had close personal ties to medical research for many years, with a keen interest especially in work on Alzheimer’s disease and type 1 diabetes— his mom died of AD in 2010 and one of his children was diagnosed with diabetes as a youngster.

Concluding his remarks, in which he denounced sequestration as “stupid,” Warner pledged to continue to work with colleagues in Congress to appropriate more funds for NIH. 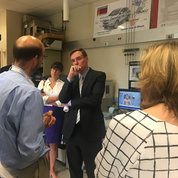 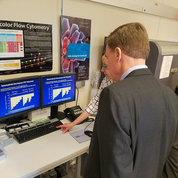