Three NIH-funded co-robots caught the eyes and interest of Capitol Hill staffers at a National Robotics Initiative (NRI) briefing: a co-robotic cane for the visually impaired, a brain-controlled exoskeleton for stroke victims and a mechanized exoskeleton that helps people paralyzed from the waist down walk.

Coordinated by the Congressional Robotics Caucus and co-hosted by Reps. Rob Woodall (R-GA) and Mike Doyle (D-PA), the recent event at the Rayburn House Office Bldg. marked the fifth anniversary of the NRI.

The NRI is a multi-agency research initiative that supports the development of next-generation robotics technology. Co-robots are robots that work cooperatively with people. “The focus is on applications in which robots work with or beside people to extend or augment human capabilities and make the most of each other’s strengths,” said Doyle.

Dr. Cang Ye of the University of Arkansas at Little Rock developed a co-robotic cane to help people with vision loss get from one place to another and avoid obstacles. The cane works through an intuitive interface, helping navigate using positioning, wayfinding, object recognition and obstacle detection.

The cane’s 3-D camera and computerized system detects and recognizes indoor structures and potential obstacles, communicating with the user through voice prompts. “It will analyze 3-D information and tell you if, for example, it’s a hallway, a stairway or a doorway,” Ye explained. The robo-cane’s roller tip is motorized and can point toward the desired destination.

Development of the co-robotic cane is funded by NEI and NIBIB. “Directing new technologies toward assistive devices such as the co-robotic cane has the potential to improve the mobility and independence of people with vision loss,” said Dr. Cheri Wiggs, NEI program director for low vision and blindness rehabilitation.

Dr. Marcia K. O’Malley of Rice University is developing the MAHI EXO-II exoskeleton robot to help heal stroke patients’ affected arms. “Once you’ve lost the electrical connections in the brain because of the damage from the stroke, you’ve got to find a detour around the damage,” she said.

O’Malley explained that the combination of thinking about movement during robot-assisted movement stimulates remapping of nerve pathways in the brain. While wearing a non-invasive cap that reads electrical activity of the brain, patients imagine moving their arm. “We’re using that to command the robot to do the movement,” she said.

The MAHI EXO-II is funded by NINDS.

Developed over the past decade, the exoskeleton suit, called the Ekso GT, is manufactured and sold by Ekso Bionics. It is the first exoskeleton approved by the FDA for use with stroke and spinal cord injuries below the seventh cervical vertebra.

“The Congressional Robotics Caucus event was a great opportunity for the community to engage with national leaders,” said Dr. Michael Wolfson, director of the NIBIB program in implantable and assistive devices. “The room was filled to capacity with members of Congress, staffers, technology developers and federal stakeholders, all participating in a lively panel discussion and engaging with assistive robot demonstrations.”

“Each agency can look at its own mission and at the same time put the best effort into collaborating with other federal agencies to achieve the NRI’s goal of accelerating the development and use of robots that work beside or cooperatively with people,” said Dr. Daofen Chen, a program director at NINDS.

For more information about the projects and NRI, visit www.roboticscaucus.org/. 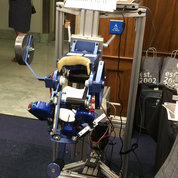 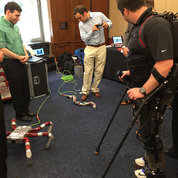 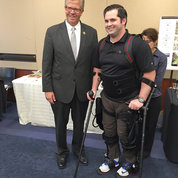