U.S. Sen. Chris Coons (D-DE), a member of the Senate appropriations committee, spent an afternoon at NIH on July 5. He met with NIH director Dr. Francis Collins before joining NINDS director Dr. Walter Koroshetz for an overview of the National Institute of Neurological Disorders and Stroke and the BRAIN Initiative.

Then, Dr. Daniel Reich, senior investigator in NINDS’s translational neuroradiology section, gave a presentation on multiple sclerosis research at NIH. Research in his lab focuses on the use of advanced MRI techniques to understand the sources of disability in multiple sclerosis and on ways of adapting those approaches for research trials and patient care.

Dr. Richard Youle, a senior investigator in the NINDS biochemistry section, tells Coons about studies on the underlying causes of Parkinson’s disease and amyotrophic lateral sclerosis.

Coons then visited the laboratory of Dr. Richard Youle, a senior investigator in the NINDS biochemistry section, who discussed his studies on the underlying causes of Parkinson’s disease and amyotrophic lateral sclerosis by deciphering the normal function of genes mutated in familial forms of neurodegenerative diseases. He has found interesting links between PD and the energy-producing mitochondria within the cell. His cell biology findings are followed up in animal models of PD and with drug-screening programs.

Dr. Jonathon Burman, an NINDS research fellow, demonstrated imaging technology of PD-linked proteins within cells and movies of PD mouse models showing that movement disorders are exacerbated by mitochondrial stress. Coons saw how drug-screening strategies are used to correct problems within the cell.

The senator later tweeted a photo of his chat with Burman, noting that “PD affects more than 2K Delawareans!”

Coons’s NIH tour concluded in the Vaccine Research Center, where he met with NIAID director Dr. Anthony Fauci and VRC deputy director Dr. Richard Koup, who is also chief of the Immunology Laboratory. The NIH’ers provided overviews of NIAID and VRC and their roles in the discovery of new vaccines for emerging and re-emerging diseases, including HIV/AIDS, Ebola, Zika and influenza.

Coons and company then visited Sullivan’s 2nd floor laboratory for her demo on VRC’s vaccine research activities and its efforts on an Ebola vaccine candidate that successfully progressed from basic research at NIH through human clinical trials domestically and internationally. 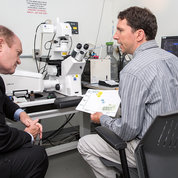 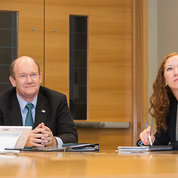 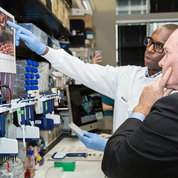