In an era when digital info rules and high-tech is titan, an emerging approach in health communication is leading us literally back to the drawing board. “Graphic medicine”—a field using comics to convey messages about wellness and illness—has burgeoned over the last decade and a new installation at the National Library of Medicine is giving it a close-up.

“In this day and age when we are so focused at NIH on data-driven discovery, to realize a whole new genre as data is out there waiting for us is extremely exciting,” said NLM director Dr. Patricia Flatley Brennan, opening a special public program recently in conjunction with the exhibition, “Graphic Medicine: Ill-Conceived & Well-Drawn.”

The term graphic medicine isn’t exactly new. Welsh physician-artist-writer Ian Williams coined the phrase in 2007 to describe the comics—images sequentially paired with words to tell a story—that he and others were creating to depict their experiences in health care. A website he developed using the term caught the attention of like-minded artists, writers, care providers and educators whose professional and personal lives had also led them to communicate medical topics through comics. They held the first conference on comics and medicine in 2010. That launched the graphic medicine movement.

NLM invited several of the field’s pioneers to an event in Lister Hill Auditorium to talk about the new discipline, its origins and impact and future directions.

“Comics and graphic novels and medical exhibitions are not medicine,” Brennan emphasized, beginning the discussion. “They are the way we display the artifacts of medicine and engender dialogue and conversation about this…Today’s conversation and the preparation for it, for me, have been a mini-seminar on looking at new ways to interact. I’m drawn to this deeply by my experience as a nurse, but I’m coming to you today as a library director. I want you to understand [that] the systematic collection of a representation of the way health is experienced in the 21st century is the fundamental commitment [NLM] has to society. The way we understand, express and communicate about health—and preserve that communication and representation—is why the library exists.”

MK Czerwiec was a Chicago nurse caring for people with HIV/AIDS in the 1990s during some of the darkest days of the deadly pandemic. Watching her patients suffer—and many of them die—began to take a personal toll on her; initially she took to journaling to express her grief. Soon, though, writing alone was no longer sufficient.

“There was a point where words were overwhelming,” she explained, introducing herself at the chat session, “and I couldn’t tell the whole story again. It was intense. It was like reliving it.”

She began to paint images of the friends she lost, to preserve their memory. One day she drew a picture of herself and added a dialogue box. Eventually the cartoons became her way to cope.

“I’m a nurse who uses comics to help me contemplate the complexities of illness and caregiving,” she summarized. “I make [comics], but I also read them and teach with them. I use them as a living, breathing way to bear witness to the experience of what it’s like….Creating comics, I’m just really focused. When I start drawing, it just tunes everything else out—it’s the closest thing I know to what meditation can be like.”

Now artist-in-residence at Northwestern Feinberg School of Medicine, she’s been creating as “Comic Nurse” since 2000. She met Williams at the first GM conference in London in 2010 and joined with him in 2012 to relaunch and co-edit graphicmedicine.org.

Artist and author Ellen Forney, who is also a comics instructor in Seattle, served as guest curator of the NLM exhibition. She said she wrote her first graphic memoir, Marbles: Mania, Depression, Michelangelo and Me, about her diagnosis of bipolar disorder shortly before age 30 and the 4 years afterwards when “I was struggling to figure out how to be stable.”

Describing the role graphic medicine plays in her life, she recalled that as a child she wanted to be one of three things when she grew up—writer, illustrator or actor.

“Now I get to be all three,” she said. “This is how I think, in comics. I’ve always been a believer in comics and the power of comics, the power of art and the power of words and the way they combine in such a dynamic way and can get so much information across in an engaging format…This is a way to get across something that’s very important to me.”

Forney talked about how she represented the whole gamut of her illness—both the depressed and manic periods as well as the reflective times when she’s between episodes.

“Text is very specific,” she related, “but it doesn’t have that more abstract resonance that art does.”

Physician-educator-researcher Dr. Michael Green is professor and interim chair of the department of humanities at Penn State Health’s Milton S. Hershey Medical Center. Nine years ago, he developed the first medical school course on comics and medicine. In addition to having students read medically themed, book-length comics about health and illness, he requires his 4th-year med students to create an original comic about their own experiences during medical school.

“I’ve long been interested in helping students better understand the experience of illness from a patient’s perspective,” Green said. “We do a great job of teaching about the clinical aspects of disease that you can learn in textbooks. But it’s much more difficult to have students understand what it’s like to be a patient with a particular illness going through that experience.”

He discovered that comics can help because the medium lends itself to experiential learning and is particularly effective for communicating emotional aspects of experience.

An equally important component of the training, Green said, is that these incipient physicians can use comics “to express themselves and tell their own stories. Comics give a creative outlet to students’ experiences.”

In 2015, he and Czerwiec teamed up with Williams and several other creative academics to produce Graphic Medicine Manifesto, a paperback book of essays and visual narratives that lays out principles of the field. The book is part of the NLM display.

In the 45-minute chat, Brennan primed the wide-ranging conversation with questions covering the guests’ perspectives on the creative process, comics as a window into uncommon experiences, balancing self-expression with therapeutics and whether it’s necessary to nail down firm parameters of a graphic medicine field still in its early formation.

The audience, too, entered the discussion during a Q&A session that followed. Later, at the FAES bookstore in the Clinical Center, Brennan and guests gathered for a reception.

The conversation is archived at https://videocast.nih.gov/summary.asp?Live=26989&bhcp=1.

“Ill-Conceived and Well-Drawn” the exhibition is open through Jan. 3, 2019, in the reading room of NLM’s History of Medicine Division on the first floor of Bldg. 38.

The traveling banner version is visiting several sites across the U.S. and Canada; see the schedule or experience the exhibition online at https://www.nlm.nih.gov/exhibition/graphicmedicine/index.html. 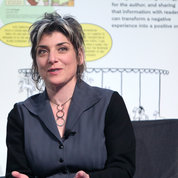 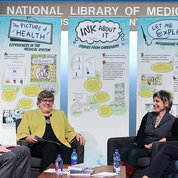 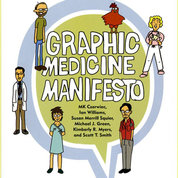 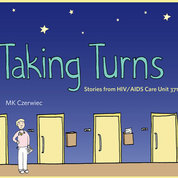 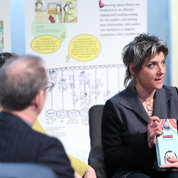 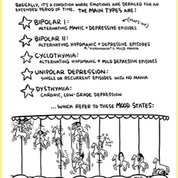 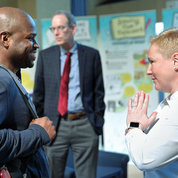