Where can you tour a pathology lab, learn how to draw blood, visit live birds and reptiles and observe smoking’s effects on the respiratory system? Oh, and drag adults toward the candy shop and knock on office doors then run, too?

Only at NIH’s 24th Take Your Child to Work Day/Earth Day, of course!

This year, more than 4,100 students participated in over 190 activities on Apr. 26. They learned about vital services their parents and guardians provide at NIH, explored career opportunities in medical research and had fun while doing it.

Around 9:30 a.m., a small group of students, their parents and guardians gathered outside the NCI Autopsy Suite in the Clinical Center. Future engineers, nurses, surgeons and lawyers donned their medical scrubs, were warned not to touch anything unless they wore gloves and told, “If you don’t feel well, let me know.” The students listened intently as they learned there’s more to pathology than what’s portrayed on forensics crime drama television shows.

In another part of the CC, technologists from the departments of laboratory medicine and transfusion medicine gave interactive presentations about chemistry, hematology, immunology, microbiology and phlebotomy during the annual Fantastic Voyage event. Other than technologists, no adults were allowed in the room—“Sorry, parents!”—until it was time for photos.

NIAID’s Christina McCormick brought her son, Kevin, for the 4th time. This year, Kevin, who wants to be a scientist when he grows up, enjoyed the police department’s K-9 demonstration and extracting DNA from a strawberry.

Elsewhere on campus, students, their parents and accompanists took part in Earth Day activities inside Bldg. 45 and under tents on Bldg. 1’s lawn. This year’s theme was “End Plastic Pollution.” Indoors, park rangers from the Scales and Tales program brought birds and reptiles, including hawks and snakes.

Outside on the lawn, kids and their chaperones could grab a bite to eat from one of many food trucks and learn about electric vehicles, the area’s local waterways and wildfire prevention.

Activities continued into the afternoon. On the CC’s 7th floor breezeway, Dr. Amisha Barochia and physician assistant Kerry Ryan, both from NHLBI’s Pulmonary Branch, staffed a booth with information about the anatomy and the function of lungs. The booth featured two sets of preserved pig lungs: one set healthy and another showing the damage that could occur from smoking.

Students could touch the lungs and inflate them with a foot pump. At first, Barochia said, most children are put off by the smell and reluctant to touch the lung. She hopes the demonstration will deter students from smoking.

NCI’s Larry Pierce’s son, Cole, touched the lung. Of the experience, he explained, “It’s cool, but I’d rather stick with the rubber” lungs.

All in all, it was another successful TYCTWD/Earth Day, informing and entertaining both adults and students. 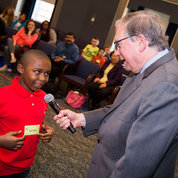 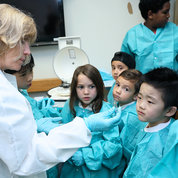 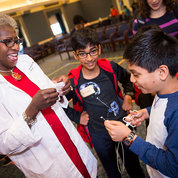 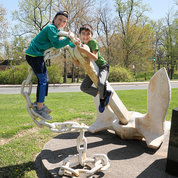 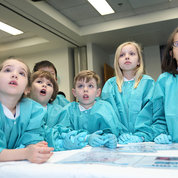 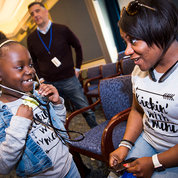 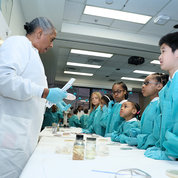 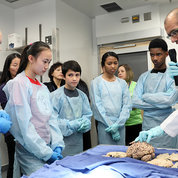 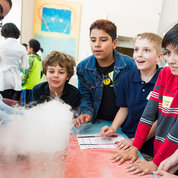 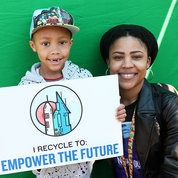 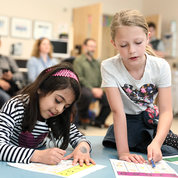 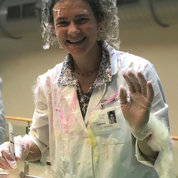 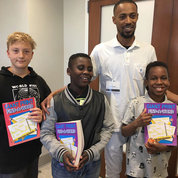 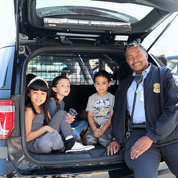 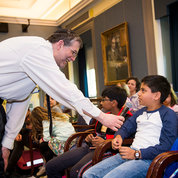 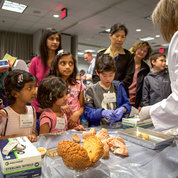 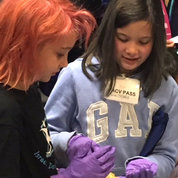 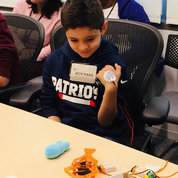 Residents of the Croasdaile Retirement Village keep music in their lives by rehearsing and performing around the Durham area in the Croasdaile Chorale.

A unique mix of science and music drew an enthusiastic crowd Apr. 22 for an NIEHS-sponsored Earth Day celebration at the downtown Durham Convention Center. The Music and Your Health community forum featured talks by scientists and leaders of local organizations devoted to the healing power of music, with performances by professional and amateur musicians alike.

In opening remarks, NIEHS and National Toxicology Program director Dr. Linda Birnbaum spoke of the presence of music in our environment. “We’re particularly interested in its health benefits, making sure that music is a part of our everyday lives,” she said.

John Oxendine used a drum and a double flute to demonstrate the role of music in Lumbee tribal life.

Co-organizer Dr. Brandy Beverly, an NTP health scientist, was inspired by the June 2017 joint production by NIH and the Kennedy Center. “I knew we needed to do something like that here,” said Beverly, who is also a violinist with the Durham Medical Orchestra. “It’s a great way to integrate music in our lives while exploring the science behind its benefits.”

Beverly went to Dr. Laura Thomas, a neuroscientist in the NIEHS Division of Extramural Research and Training. Thomas was part of the team led by NIH director Dr. Francis Collins that planned both the Kennedy Center event and an earlier conference in January 2017. “What better way to talk about music in the environment than to tie it in with Earth Day?” Thomas asked.

The program opened with Lumbee tribal member John Oxendine explaining the importance of music in ritual and daily life and performing a haunting sample of traditional flute music. “When our elders sing the old songs they knew as a child, it’s medicine to them,” Oxendine said.

He was followed by three scientists from Duke University. Dr. Kevin LaBar explained the therapies that can result from understanding how the brain processes music. “Music engages lots of different regions of the brain, and musical training can enhance those connections,” he said. Dr. Heidi White described a pilot study using a patient’s musical preferences in the treatment of dementia. “There was a statistically significant decrease in the severity of symptoms…language improvements, a greater volume of speech and more emphasis on reminiscence,” she said. Dr. Neema Sharda directs the Confusion Avoidance Led by Music (CALM) project. “We hope to shrink the risk of delirium and use personalized music to modulate the need for pain medications,” said Sharda. In one study, 65 percent of her patients reported a positive effect on mood and decreased delirium risk.

Musical performers included the Durham Medical Orchestra; the Croasdaile Chorale, composed of residents of the Croasdaile Retirement Village; and Kidznotes. Six-time Grammy-nominated jazz singer Nnenna Freelon closed the day with an interweaving of storytelling and song.

The event was a first for NIEHS. “Since I became director of NIEHS we’ve made a tradition of sponsoring community forums,” said Birnbaum. “We’re going to start making music a part of our journey towards health.” According to Thomas, NIH plans to offer more opportunities to investigate music as a therapeutic intervention. “This event continues that conversation,” Thomas said.—John Yewell