Not even gray skies and steady showers could dim the devotion or slow the wheels of NIH cyclists on Bike to Work Day 2018. Leading off the celebration at a little after 8 a.m. on May 18 was staunch BTWD supporter and NIH pedaler-in-chief himself.

“I look forward to this event every year,” said NIH director Dr. Francis Collins, who estimated 2018 was his 8th or 9th time cycling onto campus for the event. “I always like to mix and mingle with those who are brave enough to get on bikes every day regardless of the weather.”

May is National Bike Month. In 1956, the League of American Bicyclists began Bike to Work Day to promote 2-wheeled commuting and reduce traffic and pollution. In the DMV region, the Metropolitan Washington Council of Governments (COG) convenes a committee each year consisting of representatives from Commuter Connections, a transportation organization, and the Washington Area Bicyclist Association to plan the event.

Collins said he had a special reason for participating this year.

“We want to recognize Peter Chines, who was a big part of Bike to Work Day and the NIH bicycle community over the past 20 years,” Collins said. “He was a big advocate for the [NIH] Bicycle Commuting Club and he ran the Bike Bucks Program from many years. He also was part of my lab. We lost Peter last summer and we wanted to do something to honor his memory. We all miss him every day, not only for the amazing contributions he made to the lab and the research we’re working on in genetics and genomics, but also for the amazing person he was.”

The NIH director cycled about 4 miles from his house to campus with wife Diane Baker, a perennial BTWD enthusiast, and sister-in-law Debra Boterf, who was visiting from Sarasota, Fla. Collins said it was Chines who encouraged him—and taught him the best route—to bike to work.

With many of his lab members clustered under tents in the inclement weather, Collins announced that a memorial plaque honoring Chines will be installed near the bike enclosure at Bldg. 49. The citation recognizes him “for his contributions to bicycle commuting, his impact on genetics, genomics and bioinformatics research and his friendliness to all.”

A scientific editor in NLM’s National Center for Biotechnology Information who’s been helping at Bike Day several years herself, Virta said Anderson “has continued the legacy of Carl Henn values for more than 5 years…Under his leadership, NIH has continued to lead the national capital region as the employer with the most BTWD participants.”

“No one gets into this business looking for fame and fortune—and this is what constitutes fame and fortune,” Anderson quipped with a grin as he accepted the bike statuette. “In the 9 years I’ve been on campus, the number of bicycle riders and people participating in Bike to Work Day—thanks to Peter and many other volunteers—has grown. There are these occasional breaks in the weather like today that cause the attendance to diminish somewhat, but in fact there are hundreds of people who will still come and ride in all weather…Your continued efforts and your dedication to ride in weather like this is what makes this happen. Thanks to all of you.”

About 100 pit stops in the region are listed at the event’s website; cyclists register at one of the stations to qualify for a free T-shirt on event day. The stations also provide fruit, bagels and other breakfast-on-the-go items as well as coffee and other beverages. In years past, NIH has owned the COG award for employer with most BTWD participants.

According to Virta, 203 people checked in at NIH’s station this year. Distance-wise, the longest commute to campus is 40 miles round-trip, she noted. The person who has been commuting by bicycle for the longest is Donald White—for 58 years. Top five institutes participating this year were NCI, NIAID, NLM, OD and NIDDK.

At the Bldg. 1 pit stop, you could register your vehicle with the NIH Police or get a bike maintenance check by a local cycle shop. Generally the weather is kind this time of year; the last time the event was drenched was in 2014. 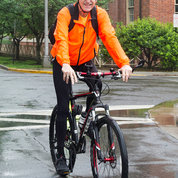 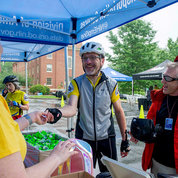 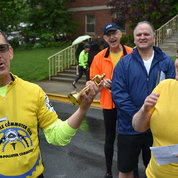 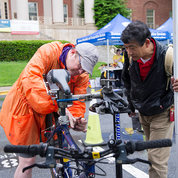 Since 2010, much of the action on Bike to Work Day has been captured on camera by Jules Asher (shown above) of NIMH. 2018 was no different. If you opted to stay dry this year but feel you missed out—never fear. Watch all of Asher’s BikeToWorkDay@NIH2018 videos:

Why We Ride (interviews)

And finally, Asher’s own ride