Rare Disease Research Progressing, But Could Go Even Faster

Getting diagnoses for patients with rare diseases can be a years-long odyssey, said Dr. Anne Pariser at NIH’s 10th observance of Rare Disease Day held in the Natcher Bldg. recently.

About 85 percent of these diseases are single-gene disorders. Only 5 percent of rare diseases have an FDA-approved therapy. At the current rate, it’s going to take thousands of years to get treatments for all rare diseases.

To speed up drug development, Pariser said, “We’re currently trying to transition from a one-disease-at-a-time model to a many-diseases-at-a-time model.”

Over the past 10 years, what’s happened scientifically in rare diseases research has been “breathtaking,” said NIH director Dr. Francis Collins, in videotaped remarks. While doctors can do a better job diagnosing and treating these conditions, he noted, there have been several advances in therapies for rare diseases in recent years.

This past October, the FDA approved a treatment for cystic fibrosis, a life-threatening genetic disorder that causes serious damage to the lungs. Until recently, there was only treatment for symptoms, Collins explained. Thanks to decades of work, 90 percent of patients with cystic fibrosis are seeing “remarkable” responses. Collins helped lead pioneering studies of the disease.

“That is incredibly inspiring to see, and we want to replicate that many times over,” he said.

The FDA has approved two therapies for spinal muscular atrophy, a group of hereditary diseases that progressively destroy motor neurons. The agency will soon review another potential treatment, continued Collins.

Additionally, he said, evidence from clinical studies suggests that gene therapy can be used to treat, and possibly cure, sickle cell disease. One version of gene therapy replaces a disease-causing gene with a healthy copy of the gene.

Researchers are also studying how to safely use gene-editing technologies, such as CRISPR-Cas9, to turn on fetal hemoglobin in sickle cell disease and also to fix genetic mutations that cause other rare diseases.

“The landscape’s really changing and changing for the better. I know it’s not changing as fast as many of you would like to see,” Collins concluded. “I want to assure you we are aware of that and doing everything we can with the resources that Congress—as representatives of all taxpayers—has given us.”

Patients with rare diseases need to be part of the FDA’s medical product review process, said Sen. Amy Klobuchar (D-MN) in videotaped remarks. She spoke on behalf of the bipartisan and bicameral Rare Disease Congressional Caucus.

Three years ago, passage of the 21st Century Cures Act was an important milestone for incorporating patient experiences into the drug approval process, she noted. Klobuchar said more work must be done to ensure that the FDA considers patient experiences and patient-focused drug information as part of the risk-benefit assessment.

Rare Disease Day at NIH was held in Natcher Conference Center for the second year in a row.

This patient-centered approach was visible throughout the day. In one panel discussion, researchers and patient advocates discussed ways to shorten the often long, frustrating time patients can wait for a rare disease diagnosis. In another session, panelists addressed the potential advantages of and accompanying challenges in developing individualized therapies for rare disease patients. A third panel examined non-traditional ways for patients and clinicians to tap into rare disease resources and information.

Congress included language in the FY 2020 budget directing the Government Accountability Office to conduct a study of the impact rare diseases have on the economy. The research is an important step in learning how much rare diseases affect patients and families, said NCATS director Dr. Christopher Austin. The results of the study will be published in 2022.

“You all [patients, their families and patient advocates] made this possible,” said Austin. “You worked with NIH and investigators to try to bring together all the things that it takes in order to make this research possible. I want to thank you for that and ask you to continue with that energy, determination, willingness to be creative and take risks. We’re with you on that.”

Rare Disease Day at NIH is sponsored by NCATS and the Clinical Center. 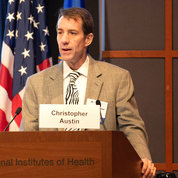 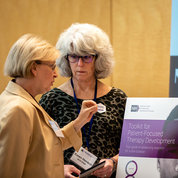 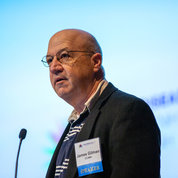 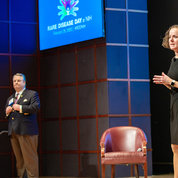