NCCIH's Barbara Benowitz founded the virtual ensemble during the pandemic.

The newest ensemble to form at NIH began, and continues, as a virtual collaboration, and it’s music to our ears. Multiple performances are up on the group’s YouTube channel and more are on the way.

Meet the Post-Bachs, a group of NIH postbaccalaureate fellows who arrange, perform and produce cover songs and post them online. While their name evokes classical music, the rotating cast of musicians covers songs in various genres, from classical to jazz, Disney tunes to folk rock.

The group formed in August 2020 during the height of the pandemic, when incoming NCCIH postbac Barbara Benowitz arrived at NIH looking to meet people and share her love of music.

Benowitz, who plays flute, had entered college as a music major, then tacked on psychology, biology and neuroscience. “So, I really appreciate and understand the connection between music and science” and the potential of music therapy to help patients, she said.

Arriving at NIH, “I didn’t know anyone yet and I really wanted to see if there was a way that I could continue performing music alongside doing my science,” the flutist recalled. 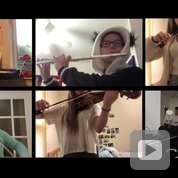 A year ago, Benowitz sent out a message on Club-PCR, an external Google group for local young scientists. The next day, messages from interested musician-scientists started rolling in.

One of the first NIH’ers to join was Faysal Shaikh, who is now a Post-Bach alum, starting graduate school in computational sciences at George Mason University. When Shaikh reached out to Benowitz, he was a postbac in an NIA neuroscience lab in Baltimore. He was grateful for the group’s virtual format, which helped him connect and perform with other postbacs he otherwise might not have met.

“The club became a really important thing for all of us, because it was a nice social hub,” said Shaikh, who played guitar and sang on several post-Bach videos. “We were able to meet new people by this virtual collaboration on music.”

Faysal Shaikh plays guitar and contributes his velvety vocals on the Post-Bachs cover of "Fly Me to the Moon."

Benowitz agreed, noting the group’s role as a social outlet exceeded her expectations. “I would honestly say that my best friends here are the people I’ve met from this music group,” she said.

As friendships bloom, the Post-Bachs keep expanding their musical networks across NIH. They’ve jammed virtually with NIH’s Affordable Rock ‘n’ Roll Act and are about to release their newest video, Wellerman (sea shanty), with vocals by NIH’s a cappella group, Nerds in Harmony.

The full Post-Bachs ensemble has 49 active members plus alumni, such as Shaikh, who return to jam when schedules allow. Making their melodies involves a talented in-house crew of instrumental and vocal leaders, music arranger, sound engineers and a video editor. They also have branched out into smaller chamber ensembles, a music therapy group and other subgroups.

“It’s amazing to be able to watch the group grow from its original small seedling to blossom into this huge, incredible ensemble and group of amazing friends,” said Benowitz. “I think that’s the best part about it: besides the fact that we’re all scientists, we’re all doing music, something [else] that we love.”