NIH director Dr. Francis Collins adds his advice to the “For the Heart, From the Heart” chalkboard. “NIH’ers: Be an ambassador for health!” he counseled employees.

On Feb. 5, the NIH campus turned into a virtual sea of red—from employees wearing red clothes to the prominent display of red food in the cafeterias. Why? Because NHLBI celebrated National Wear Red Day and kicked off the start of American Heart Month to raise awareness of heart disease, which is the number one cause of death in this country.

Among the notable highlights of the celebration was a special event at the Clinical Center, where an artist created a mural on a giant chalkboard and encouraged guests to write and share their advice about heart health. The event, hosted by NHLBI director Dr. Gary Gibbons, encouraged everyone to share advice for the heart, “From the Heart.” Gibbons wrote “Know your numbers” on the chalkboard, urging people to know their blood pressure and cholesterol measurements. The Rockledge II lobby and Bldg. 31 cafeteria had similar chalkboard-signing events and the cafeteria also featured a display of red, heart-healthy foods, including apples and peppers.

Later that day, NHLBI helped paint the Internet red. The institute teamed up with the Heart Truth campaign and the American Heart Association for a #HeartChat hosted by Woman’s Day magazine on Twitter to raise awareness about heart disease in women. Despite research advances, heart disease remains the leading cause of death for women in the United States. 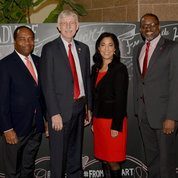 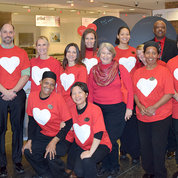 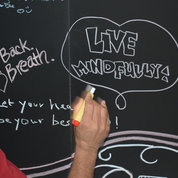 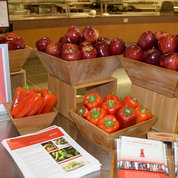 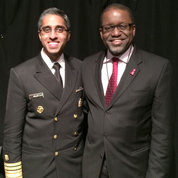