Runners sprint from the starting line in front of Bldg. 1. This year’s top team set a course record: 12:07.

Practice pays off. That’s the take-home lesson from the 33rd NIH Institute Relay.

In dominating fashion, NIA’s “Charm City NeuRUNS” won the race. After months of practice, they finished the Sept. 22 event in a record time of 12:07. That shattered the previous record, set in both 1980 and 1985, by 45 seconds. Their name will be engraved on the Allen Lewis NIH Memorial Trophy in the Bldg. 31 Fitness Center. NIA’s “B’more Benchwarmers” placed second in 14:23 and NIDCD’s “Calbindin Snap” came in third at 14:27.

Dr. Mark Mattson, chief of NIA’s Laboratory of Neurosciences, coached this year’s first and second place teams. Since May, the two squads did speed workouts on a high school track once a week. They also ran hills.

“Most of these kids have run track and cross country in college,” said Mattson, himself a competitive runner and former high school track and cross-country coach. Besides the weekly practices, team members ran 5-10 miles, 3 or 4 days a week, on their own.

Former R&W President Randy Schools explained the rules before the race on his bullhorn, as he has for decades. The first four runners complete a half-mile loop around Bldg. 1 then hand off the baton to the last runner in an exchange area near the starting line. The final runner on each team must run the loop and then turn right at a chute to the finish line on the driveway between Bldgs. 1 and 2. Schools also reminded runners to “be safe and take your time” and encouraged runners to “stay fit all year long.”

NCI’s Dr. Harold Seifried played the traditional “call to the post” on his horn to assemble runners for the first heat. NIH director Dr. Francis Collins started the race with a whistle blast. Acting NIH deputy director for management Dr. Alfred Johnson whistled the start of the second heat.

“It’s a fantastic event,” said Johnson. “It’s a great time to get outside, enjoy the weather and see all the runners come together and cheer for each other. I enjoy the camaraderie.”

At the starting line, Joe Balintfy of NEI’s “Eye Run Man” said his goal was to “have fun and not get hurt!”

Near the finish line, an original member of NIH Health’s Angels running club, Jerry Moore, directed runners around the final turn and up the chute. He was one of the organizers of the first relay in 1978. Every year on the day of the relay, he emails his former teammates who now live around the world. “The fact that it’s lasted this long is incredible,” he marveled.

A runner in patriotic garb rounds the bend from Memorial Dr. onto Center Dr.

When he last ran, Moore was on a team called “Runnin’ on Empty.” Despite the name, “We dominated it,” he laughed.

The first NIH Institute Relay was held May 24, 1978, and was won by “NIMH Shrinks” in 11:59, but that was a men-only team. For the race’s first few years, men and women ran separately. Starting in 1980, mixed teams ran heats, except in 1982, when the event briefly reverted to single-sex. The relay was not held from 1996 to 2001 due to a major construction project along Center Dr.

Back in 1982, viewer interest was such that you could have watched a videotape replay of the race at a screening long after the event.

Schools expressed his appreciation for the help he receives each year from volunteers, R&W staff, the NIH Police, original members of Health’s Angels, the Office of Research Services’ Division of Amenities and Transportation Services and others who help make the relay possible. 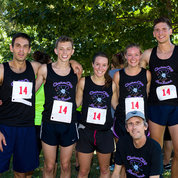 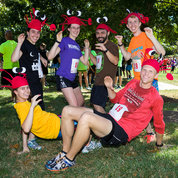 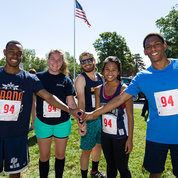 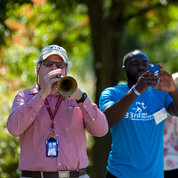 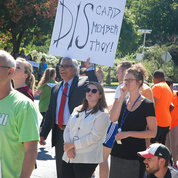 A History of Speed

In its 33-year history, the NIH Institute Relay has included fast years and relatively slow ones. The race began as men-only, then for years included such categories as men, women, mixed and master’s. The data below is for coed results only, which began in 1980.

No data exist for the 1986 race. All available years and times are: