In celebration of Native American Heritage Month, the NIH Native Scholars group, an informal gathering of trainees ranging from post-baccalaureate to postdoctoral fellows, treated their scientific and cultural mentors, as well as NIH dignitaries, to a traditional foods luncheon.

Following the blessing, sung by Loretta Grey Cloud of the Kul Wicasa Lakota and Hunkpati Dakota Nations, the Native Scholars introduced themselves, many in their Native language, and described the dish they had prepared as well as its significance to their culture.

Following the meal, Dr. Teresa Brockie, a postdoctoral fellow in the National Institute of Nursing Research, was honored by her mentee Grey Cloud and the other scholars including Dr. Tamara James (shown, l), a former fellow in NIDCR’s Office of Science Policy and Analysis, with a handmade Pendleton blanket coat and an eagle feather. Following the blanket ceremony, Brockie led all the guests in a round dance to celebrate the day. 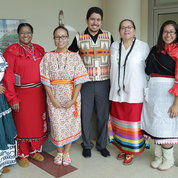 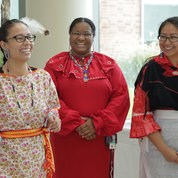 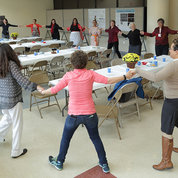 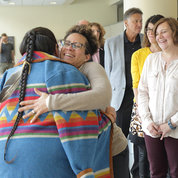 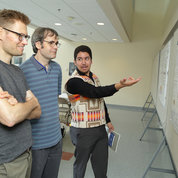