Just recently back from a trip to South Africa, where she had a “pretty scary” face-to-face with a deadly black mamba snake, Dr. Fiona Marshall had the perfect introduction to NIH’s 2017 Daly lecture.

In much of the last half of last century, he traveled to remote locations in such places as Colombia, Peru, Ecuador and Madagascar, tracking down would-be medicines from their herpetological sources—frogs, lizards and snakes.

“Although most venoms and toxins [secreted by animals] tend to work through ion channels because that’s the fastest way of killing prey or getting away from predators, a number do work on GPCRs,” Marshall pointed out. “That black mamba that I met produces venom that acts on potassium channels.”

Spiders and Lizards and Frogs, Oh My!

She showed several animals and their GPCR-acting toxins: The green mamba snake native to India emits MTX, which works on the muscarinic receptor, for example, while the king cobra’s venom acts on the beta adrenergic receptor. Both of those receptors are located on the heart; blocking them leads to cardiac arrest.

Other critters with interesting venoms that act on GPCRs include the cone snail, Gila monster, black widow spider and the Australian green tree frog.

At NIH for nearly 50 years, Daly published more than 700 articles and worked on the chemistry of ligands for several GPCRs, including adenosine, adrenergic, histamine, serotonin and acetylcholine receptors. He died in 2008, but his legacy of natural drug discovery survives him.

It was Daly who discovered the chemical structure of batrachotoxin, the poisonous substance found in some frog skin that Amazon Indians used on blow darts. He described its mechanism of action through sodium channels and went on to reveal how toxins react with different proteins in humans. Daly subsequently introduced several other tools still used today for natural products research, including forskolin and epibatidine.

Tracing the history of natural substances back to before anyone realized how they worked, Marshall said the first GPCR drugs were most likely opioids and they were probably first used in religious ceremonies, then as medicines—some of the earliest anesthetics—in ancient Samaria, or what is now Iraq.

Opium, cannabis and atropine were among the first known GPCR drugs.

It wasn’t until the 1890s that the concept of chemoreceptors, substances in the human body that interacted with these plant-based medicines, was introduced.

From Gut Baths to High-Throughput

“The start of pharmaceutical drug discovery of GPCRs as we know it today came about in the 1950s and 1960s,” Marshall said. “Tissues, mainly from animals such as the guinea pig and rat, were strung up in gut baths and analogs were made of the ligands…By then we knew quite a lot of GPCR ligands, although that’s not what they were called. We knew a number of different chemicals that had a physiological effect.”

Medicinal chemists, she explained, sketched out the analogs and tested them on gut baths, the classical pharmacological screening tool used to gauge a compound’s interaction with organ tissue.

The field moved toward the molecular age in the 1970s, Marshall said, with the dawn of radio-labeling techniques—using a radioactive tracer to mark a substance. The new methods meant researchers could track the binding sites of substances as they interacted in tissues.

Through radio-labeling, scientists first purified and then cloned the first receptor, realizing that “GPCRs were actually part of a large, superfamily of proteins. This then followed a great era in cloning all of the other GPCRs,” said Marshall.

About a decade later, with human genome sequencing, researchers could list around 800 human GPCRs, “about half of which are olfactory receptors used for smell and taste. About 400 others are non-olfactory receptors that we consider to be potential drug targets.”

High-throughput screening, in which large libraries of compounds are tested against GPCRs, became the next phase for drug discovery, Marshall said. Not nearly as many substances made it to market this way, however. Tissue bath techniques had produced far more viable drugs.

The first GPCR structure was rhodopsin, purified from bovine retina and crystallized in 2000, giving scientists their first look at a GPCR in 3-D.

It took another 7 years until the next GPCR was cloned—the beta2 receptor—by the teams of Brian Kolbilka of Stanford and Ray Stevens of Scripps.

Enter Heptares Therapeutics, the company Marshall cofounded in 2007 to take advantage of a uniquely designed technology that makes GPCRs more stable. The technology was first developed at the Laboratory of Molecular Biology in Cambridge, U.K.

“This has enabled us to do structure-based design, to design drugs that really fit the receptor much better, are much more specific and hopefully have a lower attrition rate as they go through development,” Marshall explained.

Hepatares’s first X-ray structure success was to solve the adenosine A2A receptor, which Daly played such a crucial role in defining. Over the next decade, the team at Heptares identified potential drugs for a wide range of ailments, including Alzheimer’s disease, migraine, schizophrenia, cancer, attention deficit hyperactivity disorder and Parkinson’s disease.

In 20 years of GPCR drug discovery from 1995 to 2015, 116 GPCR-targeted drugs have been approved by the FDA. That represents about 20 percent of all drugs approved in that time period. The newly discovered medicines modulate the activity of targets across all disease fields, from the central nervous system to the immune system.

Marshall touched briefly on her group’s most recent work with the identification of structures of receptors involved in irritable bowel disease, Crohn’s disease and inflammatory pain. She ended by summarizing what she described as a now wide-open field for GPCR-structure drug development.

“There’s an increasing realization that GPCRs are not simple,” she concluded. “There are many complex binding sites that can be accessed all over and even around the receptor, and intracellular sites as well…These all will have different allosteric actions and different therapeutic actions. Getting X-ray structures allows us to understand much more about the interaction of the drugs with the receptor and can enable further GPCR drug discovery.” 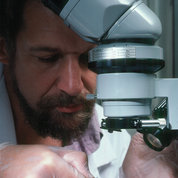 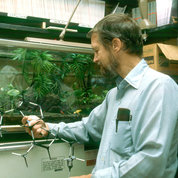