Getting a Feel for Structure

Scientists have known for some time that influenza is a weed in the lawn of life. Shaped very much like dandelions, new hemagglutinin (HA) proteins that decorate the surface of flu viruses crop up every year—persistent, hardy and unwanted. What’s more, the molecules show an uncanny ability to change annually, outwitting the previous year’s vaccine. That’s why we have to get a new flu shot every year, to fight off the HA molecule’s new look.

Since January, scientists in NIAID’s Vaccine Research Center have used several advanced tech tools to study flu’s structure, to see how it latches onto our body’s cells and figure out the weak spots where a vaccine could best attack and destroy the molecule.

Three-dimensional printing capability places detailed models of flu HA molecules in researchers’ hands. Virtual reality technology lets scientists walk into a molecule and view it from the inside out. These fresh ways of seeing viruses open intriguing new opportunities for research.

For several years, VRC deputy director Dr. Barney Graham, a physician and virologist, has kept models of two conformations of the RSV F protein, from respiratory syncytial virus, atop his desk. Graham, in collaboration with Dr. Peter Kwong, a VRC structural biologist, solved the structure of the prefusion form of F and designed the models; NLM printed them in 3-D. Graham refers to them often, reminding other VRC scientists that the models help him figure out spatial relationships for vaccine design.

“I hold these models in my hands almost every day to put new data on antibody binding or protein stability into context of the 3-D structure,” says Graham, chief of the VRC’s Viral Pathogenesis Laboratory.

And his enthusiasm for 3-D printing has infected his whole team.

Imagine the flu molecule is shaped like a flowering weed. As Dr. Michelle Crank, head of the translational sciences core in the Viral Pathogenesis Laboratory, and head of the flu program under Graham, explains, scientists want to cut off the top of the molecule (the part that changes and adapts to evade the immune system every season) and address the constant part—the molecule’s “stem”—that stays much the same from strain to strain.

That way, a universal vaccine might be developed to attack all strains and save us from getting the yearly shot.

Virtually walking inside the flu molecule, Dr. Michelle Crank manipulates elements of her journey—she can zoom in, pan around and even flip her environment. Looking on is James Tyrwhitt-Drake, a scientific visualization specialist in the Bioinformatics and Computational Bioscience Branch, NIAID.

3-D printed models mean the scientists no longer have to imagine molecule shape; they now get a better feel for how the proteins covering the virus move and behave by holding them in their hands.

“When you cut off or change part of a big molecule, what’s left doesn’t just stay in the same shape or fit together the same way on its own,” Crank explains. “Any 3-D model like this might help our eyes find subtle relationships and changes between strains of HA that could give us clues for how to stabilize the stem across all the strains.”

Viruses and their surface molecules are miniscule, far too small to be seen with the naked eye. In fact, most of the molecules scientists study are many thousands of times smaller than a strand of hair. The benefits of a handheld model are obvious.

“The flu molecule we are working on is absolutely tiny—about 13 nanometers in the longest dimension,” notes James Tyrwhitt-Drake, a scientific visualization specialist in the Bioinformatics and Computational Bioscience Branch of NIAID’s Office of Cyberinfrastructure and Computational Biology. “It’s important to scale the model of the molecule in a deliberate way, so comparisons can be made. The software we use will convert each ångström [0.1 nanometer] in the molecule to a millimeter in the printed object, which is a magnification of precisely 10 million times. However, if the model has delicate features, I will print it larger—15 million or 20 million times—so that they will not break during printing.”

Dr. Phil Cruz uses a laptop to get the VR model set up on screen as Dr. Michelle Crank prepares to don the headset.

If the molecule is “large” like a whole virus, Tyrwhitt-Drake says, he’ll scale it down to 1 million times, so it will fit in the volume of the printer.

“Not only can you look at it and hold it in your hand,” Crank says, “but if you also have an antibody [model], you can have that antibody come in and bind at a particular binding site or see relationships between the different components.”

All sorts of uses emerged for the 3-D models, which also have become popular props at lectures.

“This molecule is heavier than I expected!” says Dr. Jeffrey Boyington, a structural biologist in VRC director Dr. John Mascola’s Laboratory of Virology and lead designer of the headless HA stem vaccines, recalling his initial reaction to holding the printed HA molecule in his hand. “One of the first things I noticed is that these are great teaching and discussion tools for one-on-one or small group settings. You can easily point to a critical region and others in the room see exactly see what you are referring to in 3 dimensions with the added perspective of seeing the whole molecule.”

When Bill Gates came to call at NIH this past spring, VRC scientists were tapped to give him a demo of some of their latest gadgetry. In addition to literally passing around the flu strains, the cyberinfrastructure team set Gates up with a virtual reality headset and let him take a stroll through an HA molecule.

Noting that the experience was similar to video gaming, Gates wanted to know how an admittedly sophisticated toy could help scientists in the global fight against viruses. Researchers then described the potential impact of their new views.

Carrying the flu. With the virtual flu molecule on screen behind them, Cruz, Tyrwhitt-Drake, Crank and Dr. Meghan McCarthy, program lead for BCBB’s 3-D Printing and Biovisualization Program, each hold a 3-D print version.

“When you get inside the goggles,” Crank explains, “you can actually stand in that space and look around at all the side chains coming off of the protein, pointing at you, and you can see how big the space is.

“Not being a structural biologist, I have not spent a lot of time using molecular graphics programs on a computer, so seeing inside the molecule and looking out was a totally new perspective for me,” she adds. “Appreciating the gaps inside a 3-D structure like the HA molecule is something you cannot do from the printed models, since you cannot see ‘through’ to the inside. And sometimes it’s understanding that inner structure that can reveal helpful relationships for designing ways to stabilize vaccine immunogens that utilize only part of the whole molecule, but still need to present an authentic or accurate shape to the immune system.”

Of course, no matter how advanced, technology alone won’t produce effective vaccines overnight, scientists acknowledge. Having more up-close and personal interactions with viruses, however, will help researchers better understand what we’re up against.

“We will still be using desktop molecular graphics programs for most of our work,” concludes Boyington, “but as we periodically examine the 3-D print models or walk through VR in the coming months, we might have some eureka moments of insight since these views give us a slightly different perspective than we are used to.” 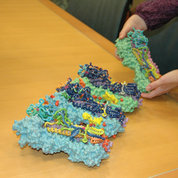 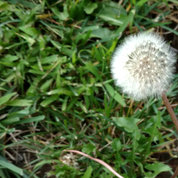 In 2007, Dr. Darrell Hurt, head of the computational biology section in NIAID’s Bioinformatics and Computational Biosciences Branch (BCBB), began experimenting with 3-D printing for molecular visualization. He started by taking raw molecular structure data and putting it in a 3-D-printable form.

“There’s so much more you can learn when you have it in your hands, rather than looking at it on a 2-D screen or even with 3-D glasses,” explains Dr. Meghan McCarthy, program lead for BCBB’s 3-D Printing and Biovisualization Program.

BCBB provides data analysis consultation and custom software development services to NIAID researchers and wanted to make 3-D printing more accessible to the public. As a solution, the branch created the NIH 3-D Print Exchange (https://3dprint.nih.gov), an online resource where people can find models and share their own models as well as web tools that eliminate skills barriers.

“We developed automated tools that are free. Anyone around the globe can use them,” says McCarthy, who manages the exchange under BCBB’s larger program for 3-D printing and biovisualization.

The exchange is owned and maintained by NIAID, but was initially created in partnership with NICHD and the National Library of Medicine with support from the 2013 HHS Ignite and 2014 HHS Ventures initiatives. Team members were recognized with an HHS Innovates award in 2015.

BCBB has processed more than 100 scientific 3-D printing requests over the last 10 years, reports BCBB Scientific Visualization Specialist James Tyrwhitt-Drake. “However, each request may include multiple different models or copies of the same model,” he says.

Other models designed and printed by James Tyrwhitt-Drake for the exchange’s collection include (clockwise, from top right) Zika virus capsid, bacteriophage, Cas9 from CRISPR, papilloma virus, nucleosome and HIV capsid.

“Color printing of scientific models requires a considerable amount of preparation and processing time, so we primarily limit the service to requests from NIAID staff that have scientific utility. Production is limited by the physical complexity of the model, consumption of materials and occasionally troubleshooting mechanical or software issues with the printer.”

Over the years, as technology advanced, BCBB’s capabilities and responsibilities expanded to include other 3-D technologies, including virtual and augmented reality.

Tyrwhitt-Drake, along with team member and structural biologist Dr. Phil Cruz, also produces the virtual reality models that allow investigators to walk inside a molecule and have a look around its structure.

Use of virtual reality has “really taken off, especially in the last year,” McCarthy points out. “Anyone that we’ve ever put into the 3-D goggles—even people who have worked on a particular molecule for 10 or 15 years as part of their career—says they see something different, that they didn’t see before.”

Both 3-D printing and VR are useful applications for learning, sharing and education, as well as research, McCarthy notes. In addition to exploring their work from a unique perspective, researchers also seem to enjoy the “cool” factor.

“Most people think of gaming and entertainment when they think of VR,” McCarthy concludes, “but we really like that we’ve been able to bring this scientific value to it.”