The senator, members of his staff, along with Girod, a medical doctor, and a couple of KU scientists involved in Alzheimer’s disease research were greeted at the Porter Neuroscience Research Center by NIH director Dr. Francis Collins and principal deputy director Dr. Lawrence Tabak.

NIA grantee Dr. Jeffrey Burns, director of the Alzheimer and Memory Program, professor in the department of neurology at the University of Kansas Medical Center and assistant director of the General Clinical Research Center, Dr. Russell Swerdlow, director of the KU Alzheimer’s Disease Center and the KUMC Neurodegenerative Disorders Program, and KU Director of Federal Relations Jack Cline were among those touring the PNRC.

There the group met with NIMH director Dr. Joshua Gordon, NIA director Dr. Richard Hodes and NINDS director Dr. Walter Koroshetz. The BRAIN Initiative and Alzheimer’s were among topics discussed, before the group embarked on a laboratory tour spotlighting the genetics of neurodegenerative diseases.

Collins and several other NIH leaders join the Kansas contingent for a briefing on Alzheimer’s.

At a roundtable discussion on Alzheimer’s, Hodes and Koroshetz were joined by Dr. Eliezer Masliah, director of NIA’s Division of Neuroscience.

The group heard about advances in genetics and biomarkers converging on new-generation early intervention trials and new initiatives and programs for AD research and took in an Alzheimer’s imaging presentation by Dr. Susan Resnick, a senior investigator in NIA’s Laboratory of Behavioral Neuroscience. She discussed how PET scans for the amyloid and tau proteins are being used to track disease at the earliest stages of AD and to select patients for tests of new medications. 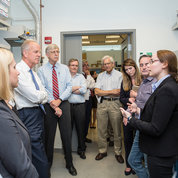 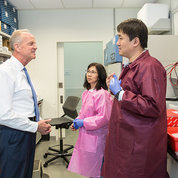 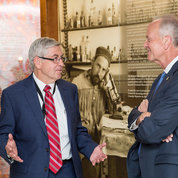