NCBI’s Dr. Laks Iyer (l) helps a woman use the telescope he brought to view the eclipse.

Even though NIH got only a tad more than 80 percent “obscuration” from the nationwide solar eclipse on Aug. 21, it still became an occasion for outdoor conviviality in all quadrants of campus.

As the moon’s shadow invaded the face of the sun at 1:17 p.m.—it cut diagonally across the star’s disk from roughly the 2 o’clock to the 8 o’clock position—one could stroll up Center Dr. past Bldgs. 1, 50 and Natcher and see almost no one gazing upward.

At a little past 1:30, a man with a home-made cardboard viewing apparatus appeared in front of Bldg. 38A.

“I didn’t know my modeling career wasn’t over yet,” joked Mike Krzywanos of the National Library of Medicine’s Office of Computer and Communications Systems. He had made the box earlier that day, and was testing it out with colleague Nick Napoli.

Like many NIH’ers, Napoli tried to capture the eclipse on his cell phone, with mixed results.

Dr. James C. Yang, a senior investigator in NCI’s Surgery Branch, captured this photo in Newberry, S.C., which was along the path of totality stretching from Oregon to South Carolina.

The real action at NLM was on top of the parking deck on the west side of 38A. There, Dr. Laks Iyer, a staff scientist in the National Center for Biotechnology Information, had set up his 6-inch Dobsonian mount reflector telescope. More than two dozen people, mostly from NCBI, gathered for a peek. A Mylar filter made it easier to see images captured at 48X magnification.

Clearly visible through the telescope were sunspots. “They look like the floaters I see [in my own eyes],” said one woman. Others thought the spots were just dust on the lens.

Only moments before maximum eclipse at 2:42, a large gray cloud obscured the sun, prompting disappointed lowing from the crowd. But within 4 minutes, the sun re-emerged to cheers.

Before the eclipse ended at 4:01, there had been a downpour—a sun shower, actually—that soaked at least part of campus. Nature was keen on showing its versatility.—Rich McManus

Things Were Looking Up

The Worm Lab gathers on the Paul Rogers Plaza for the historic sun show.

Cell phones, cereal boxes, tin foil and cardboard contraptions as well as specially filtered telescopes, binoculars and cameras. For one afternoon at NIH, a majority of things seemed focused on the skies as the first total solar eclipse since 1979 began to unfold across the U.S.

Setting up a picnic station beneath the flag pole at Paul Rogers Plaza in front of Bldg. 1, a group from the Worm Lab swapped several models of eclipse-viewing glasses, comparing views of the sun. “We’re taking a lab break,” explained one group member. “Yeah, a lab break,” agreed another, smiling broadly.

A few yards away on either side, groups tried more low-tech ideas, guided in one case by YouTube do-it-yourself videos.

“Wonder what the degree of luminosity is, with 80 percent coverage?” a curious employee wanted to know. At a science place like NIH, the answer [0.843 magnitude] should have come swiftly and confidently, right? Nope.

“You have to angle it just right,” suggested an NCCIH employee, adjusting a cereal box viewer for a clueless reporter in front of Bldg. 2. “There. Can you see it now?”

“Can you see it now” was also the refrain echoing among a group diligently configuring a poster-size cardboard gadget involving duct tape, a tripod and binoculars. With endless patience, good-natured ribbing and lots of humor, the DIY folks attempted to assemble a makeshift eclipse projector. Results were…mixed. Fortunately, most in the group had protective spectacles as backup.

“Everybody got glasses? Okay, have fun and be careful.” It sounded like Everymom’s cautionary sendoff, but the words actually were launched at about a dozen coworkers spilling out of Bldg. 2, shortly after 2 p.m.

From “Wow!” to “Impressive” to “Spectacular!” NIH’ers’ reactions to witnessing a bit of history in the heavens were at once individual and uniform: On eclipse day, everybody loves science.—Carla Garnett

‘Once in a Lifetime’

Children’s Inn resident Farrah Mackenzie did not want to miss a “once in a lifetime opportunity.”

At the Children’s Inn at NIH, staff and guests donned glasses and watched the eclipse from the inn’s parking lot. A little before 2:42 p.m., someone shouted “Here it comes!” At the last minute, clouds obscured the sun, but they parted often enough for everyone to catch a glimpse.

Inn resident Farrah Mackenzie, 11, of Los Angeles, said viewing the eclipse “could be a once in a lifetime opportunity. Although I didn’t get to see it completely because of the clouds, it’s still a really cool opportunity.”

And take it from Farrah—she knows cool opportunities. She stars in the movie Logan Lucky alongside Channing Tatum, Adam Driver and Riley Keough.

Another resident, Sophia Hogas, 9, of New Jersey, said it was her “first-time ever” seeing an eclipse. Her parents saw one in Romania once. She also described the experience as “pretty cool.”

When it was over, residents went inside for a solar eclipse party, where they decorated cookies, participated in a cakewalk and created art projects.—Eric Bock

“Oh wow, these really work!” said Samira Rashid of NLM as she gazed at the eclipse near Bldg. 38A.

Hundreds of NIH’ers gathered on the quad flanked by the Porter Neuroscience Research Center, Vaccine Research Center and NCI’s Bldg. 37 on Aug. 21 to watch the solar eclipse, using a variety of gadgets to help protect their eyes.

As momentum was building, so was the crowd, which happily shared disposable solar glasses and other eclipse viewers. Some scientists and fellows used sheets of double-exposed black X-ray film.

Brad Davidson, an NHGRI fellow, brought in a welding mask he borrowed from his father. The view would be cloudy through the mask, he said, but using polarized sunglasses under the mask helped clear up the image.

Others viewed the eclipse in a more indirect way. Some put pinholes in a cardboard box and looked at the bright crescent-shaped sun reflected inside the box. One scientist with box in hand excitedly said he had viewed the 2009 eclipse in China the same way. Others stood with no gadgets, their backs to the sun, looking at shadows on the ground behind a tree.

“It was like seeing the phases of the moon go by quickly,” said NCI postbac staff scientist Binwu Tang.

If this was a total eclipse, why didn’t the entire sky get dark? “We’d need 95 percent cover for the sky to get dark but here we had 80 percent cover,” said NCI senior investigator Dr. Suresh Ambudkar, who viewed the eclipse with his colleagues through solar glasses.

There were collective gasps and shouts at 2:33 when the sun slipped behind the clouds, but it soon emerged brightly to cheers before the 2:42 eclipse peak. “The most fun was the crowd reacting to the rain cloud when it blocked the eclipse [for a short time],” said NCI fellow Hal Baker.

An administrative officer from the VRC, enjoying the experience with her colleagues, exclaimed, “It’s a party out here!”—Dana Talesnik 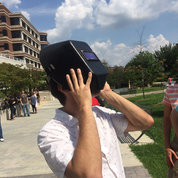 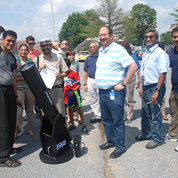 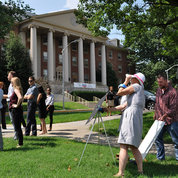 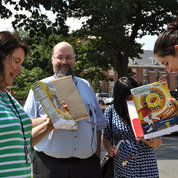 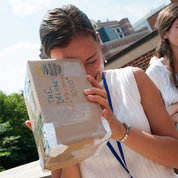 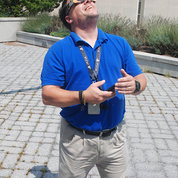 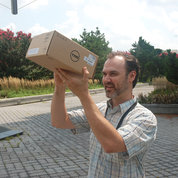 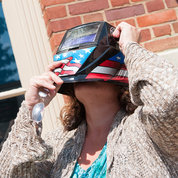 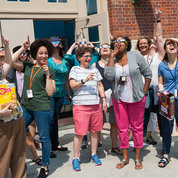