31st Research Festival Celebrates Science, People Who Do It

​The first talk in the first plenary session of this year’s NIH Research Festival provided a perfect metaphor for the annual event.

Discussing his discovery of “neuronal avalanches” that occur in brain activity, Dr. Dietmar Plenz noted that one of neuroscience’s loftiest goals is to understand the dynamics of these amazing onslaughts of activity—these downpours in the gray matter—how they are organized and how they can be quantified and measured.

“The complexity is incredibly high,” said Plenz, principal investigator in NIMH’s section on critical brain dynamics. “In order to understand neural dynamics, we have to reconstruct each element. We have to understand its connection statistics and we have to understand how activity propagates along those [brain cell] branches and that is truly a very complex challenge…We decided years ago that maybe we can’t reconstruct how each individual neuron fires, but maybe we can pick up how neurons who are neighbors fire together.”

NIH’s annual “avalanche” of science can be described in similar terms: For 3 days, the event heroically attempts to capture and present for a wide audience the breadth and complexity of research interaction that happens here on a daily basis. For a brief time, attendees can witness how scientific neighbors fire together.

“The Research Festival is about the science we do here, but also about the people who do that science,” noted NIH deputy director for intramural research Dr. Michael Gottesman, opening this year’s event on Sept. 13. The 2017 edition featured 40 talks and panels as well as 400 posters and exhibits “covering some of the hottest research at the NIH.”

“The idea was to get people out of their labs—people become very parochial around here; they’re sometimes chained to their lab benches—so they could meet other people at NIH, get some new ideas, talk about their research and hear about others’ research,” in order to spur more collaboration and interaction.

“That’s still the intent” of the festival, now expanded three times as long, he said.

“You’ll notice that most of the poster presenters are our trainees,” Gottesman continued, joking. “That’s because the trainees and the fellows who are here do most of the exciting science at the NIH…One of the most fun aspects of the festival is when we ask the scientific directors and the institute directors to present posters about their own work…This is an opportunity for them to find out what’s going on in their own laboratories.”

“Although my colleagues in other institutes might contest this, those of us who work in the field of neuroscience think that, by far and away, the brain is the coolest and most amazing organ,” Amara quipped, introducing the first plenary session on the Brain Research through Advancing Innovative Neurotechnologies (BRAIN) Initiative, which was announced by President Obama in 2013.

“[The initiative] addresses the ultimate grand challenge of understanding the brain,” Amara explained, “how the brain and nervous system regulate thought, action, mood and sensation and how to improve and restore its function when things go awry.”

For the first time at Research Festival, in addition to NIH intramural scientists, an extramural investigator presented. BRAIN grantee Dr. Patrick Kanold of the University of Maryland gave a talk, due to the unique intra/extramural nature of the initiative.

The Fellows Award for Research Excellence (FARE) Program, in its 23rd year, kicked off festival day two. FARE recognizes outstanding research by intramural fellows working here for fewer than 5 years. Close to 800 competitors submitted entries this year; 199 received a $1,000 travel award to present their research at a scientific meeting in the coming year. The NIH fellows committee (Felcom), institute/center scientific directors and the NIH Office of Intramural Training and Education sponsor FARE annually.

All trainees were feted with an ice cream social on the next day, when NIH leadership including NIH director Dr. Francis Collins served the cold refreshment.

Inflammatory diseases, another cross-cutting topic on the Intramural Research Program’s long-term bucket list, was the theme for the second plenary session.

“What we’ve learned since the turn of the century is that basically every cell is an immune cell,” said NIAMS scientific director Dr. John O’Shea, moderating the plenary. “No matter what disease you’re working on, you may not think of yourself as an immunologist or inflammatologist, but in fact you are. All of us here, as we’re doing our work—even if we are T cell and B cell biologists or classic immunologists—we think more about how cells other than traditional immune cells impact traditional immunology—everything from microbiome acting on epithelial cells and so on. [Inflammation] is a very exciting area and now is a very exciting time to be an immunologist.”

The final plenary on day three covered another White House-spurred initiative, the Cancer Moonshot, launched by Congress via the 21st Century CURES Act in 2016.

“The goal is not only to accelerate cancer research, but also hopefully to innovate and find new avenues,” said Chanock, introducing the session. “But the most important thing is to accelerate, to do what we believe could be done in 10 years in 5 years or less.”

Chanock heralded the leadership of the moonshot’s “driver” at NIH, Dr. Dinah Singer, senior investigator and chief of the molecular regulation section in NCI’s Experimental Immunology Branch and director of the Division of Cancer Biology.

“We would not be where we are without Dinah and her initiative, her drive and her vision to be able to realize it,” he said, acknowledging “the hundreds of people involved, but for the NCI portfolio, it maps back to Dinah.

“That’s the key thing about the moonshot,” he continued, “not only is it driving the science, but also it’s making the science available, it’s working in important teams in a collaborative fashion to put our collective feet on the accelerator.”

Occurring at designated times throughout the 3 days, in between lectures and symposia, were virtual reality demonstrations, a Technical Sales Association tent show of scientific equipment, a Green Lab Fair highlighting the latest in sustainable tools and techniques and an animal tribute ceremony acknowledging the vital role non-human research partners play in scientific accomplishment at NIH.

Food also figured prominently in the festival, with an IC and scientific directors’ bake-off held on day one during their poster session and a “Taste of Bethesda” lunch sponsored by the Recreation and Welfare Association on day two. 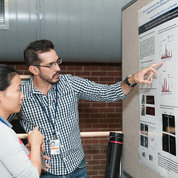 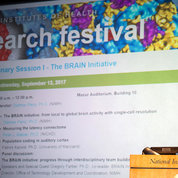 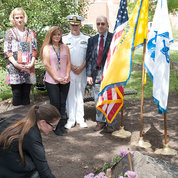 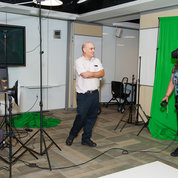 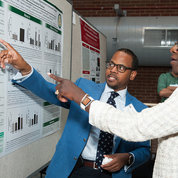 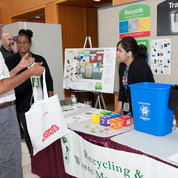 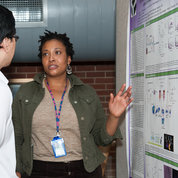 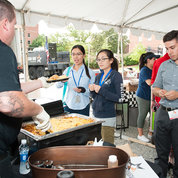