You’d smile too if you were on winning team.

The race to the finish was a bit tougher than in years past. It was a sunny, breezy afternoon on Sept. 28 when 105 spirited teams participated in the 34th NIH Institute Relay. But while most previous relays looped around Bldg. 1, this year’s event was relocated due to construction. The new route behind the Clinical Center was significantly shorter but the last runner of each team had to run up an incline to the finish line.

“It was tough but fun,” said Dr. Tom Bulea, a biomechanics scientist who ran with team RM Dangerous. “This course was shorter, but it was hard to pace. I wish the finish wasn’t uphill!”

His teammate Rachel Eisenfeld, a pedorthist who works in the CC’s rehabilitation medicine department, agreed. “It would’ve been hard to sprint the whole time,” she said. “You had to plan your speed.”

Each runner traveled 500 meters around the Clinical Center’s south lawn and 10-H parking lot before passing the baton to 1 of 5 teammates. The usual Bldg. 1 course was longer, at 800 meters per runner, but on mostly level ground.

“It was really fun. The ramp going uphill at the end was quite challenging, but we want some challenge in a short run,” said Trinh Pham, a researcher in NCI’s pathology lab and member of team Volleyball JJIRT. His teammates work at different ICs but play volleyball together on campus after work three times a week.

Another team from multiple ICs was Cirque de Sore Leg, a group of contractors who raced together for the first time. “It was great to get outside for a bit,” said Kyle D’Amico, an animal care technician with NEI. “I have not trained for this. I’m just doing this for fun.”

But one team that did train, quite rigorously, showed up ready to win and had the fastest time 2 years running. NIA’s Charm City NeuRUNS finished the relay with a time of 6:56. The second and third place teams, NICHD’s Running Gels and NIDCD’s Hertz So Good, finished just two seconds apart, clocking in at 7:38 and 7:40.

“Beginning in May, we ran together twice each week,” said Dr. Mark Mattson, a senior investigator and lab chief at NIA who ran with and coached the NeuRUNS. Every Wednesday before work, they’d do an early morning high-intensity run at a nearby high school track. On weekends, they did a 90-minute trail run at different state parks in Baltimore.

“Some of the research in my lab is aimed at understanding the cellular and molecular mechanisms by which exercise benefits brain health,” said Mattson. “Such mechanisms are fully engaged in these creative and productive postbac and postdoc fellows on my relay team this year.”

Many relay runners said they hike or bike or hit the gym regularly to stay in shape. Amanda Crinks with NCI’s Hemoglobintrotters said they all run regularly, just not usually together.

Racers show off jovial spirits before taking off.

And some came purely for fun to jog or walk the course, such as CSR’s Snailin’ Along and Baby Got Track. CSR director Dr. Richard Nakamura also participated with some of his deputy directors on a team called Review Directives.

“We usually walk a lot,” said Nikon Hill-Coston, an extramural support assistant from Snailin’ Along. “We’ve never done this before so we’re excited in a don’t-fall-on-your-face kind of way.”

NIAID’s Pox Jox have been running the relay every year since the relay began, with rotating members. Said Pox Jox’s newest member, postbac Shira Glushakow-Smith, “It was a lot of fun to do non-lab stuff, relax with my section and represent my institute.”

As in years past, the relay was sponsored by the R&W Association and ORS’s Division of Amenities and Transportation Services. 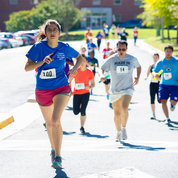 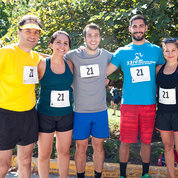 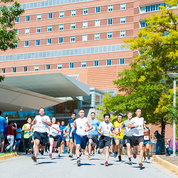 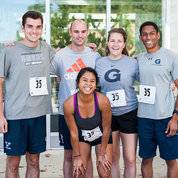