PAs assemble for a photo after the event recognizing their work.

NIH recognized the contributions physician assistants (PAs) have made on campus, in the military and the Public Health Service on Oct. 12 in the Clinical Center’s southeast patio room. The event was held during PA Week.

He said NIH employs about 40 PAs. On campus, they take care of patients, help conduct clinical and scientific research and mentor staff, from nurses to physicians to fellows. He first began working with PAs 15 years ago. Right now, he works with two. “These two PAs are the best clinicians I’ve ever worked with,” Childs said.

The profession has military roots. In 1965, Dr. Eugene Stead founded the first PA education program at Duke University, said Clinical Center CEO Dr. James Gilman during the event’s keynote address. The first students were four Navy corpsmen. They graduated in 1967, marking the beginning of the profession.

Before he came to the CC, Gilman worked extensively with PAs. During his 35 years in the U.S. Army, he learned how valuable they are. In the military, he explained, they provide routine care, train medics and, when deployed, provide advanced trauma and life support skills. These responsibilities “illustrate the flexibility and adaptability of PAs as a profession and as individuals.”

Gilman noted, “The future of your profession looks very, very bright. I’m very proud to work with all of you.”

PAs in the PHS have shown their ability to provide health care and leadership, noted Deputy Surgeon General Sylvia Trent-Adams. They’ve responded to natural disasters like Hurricanes Katrina and Sandy and participated in the response to the Ebola outbreak in West Africa.

Trent-Adams concluded with a challenge: “You have done a lot, you continue to do a lot, but there’s a lot more for you to do.”—Eric Bock 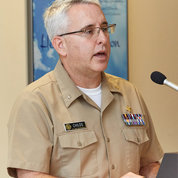 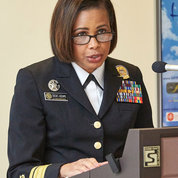 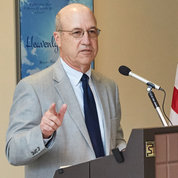 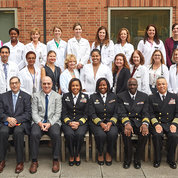