Normally, when more than 1,300 employees walk off the job mid-day, a workplace has a problem. That is, unless it’s NIH’s annual Take a Hike Day, when the boss actually encourages the at-work workout.

“Are you ready to walk, run and absolutely take advantage of this beautiful day?” enthused NIH director Dr. Francis Collins, briefly taking the podium set up in front of Bldg. 1 June 7 to cheer on participants.

Describing himself as “a little bit of a fitness nut,” Collins said he envied employees who were able to arrange their schedules and put NIH’s health and fitness messages into action. He had a meeting downtown and could not take part.

Collins also suggested that those participating capitalize on their good fortune to be able to work at such a scenic locale. Recalling the rich history of NIH’s formerly rural Bethesda campus, he said there are more than 8,000 trees of 150-plus species currently amid the 300 acres where more than 50 species of birds have been spotted. He also acknowledged other wildlife that have been documented in the vicinity such as deer, Canada geese and even a bear once a few years ago.

It was “exactly 80 years ago this month [June 1938] that the cornerstone [of Bldg. 1] was laid,” Collins recalled. Quoting President Franklin Roosevelt when he visited NIH in 1940, Collins said the institution was “’dedicated to the underlying philosophy of public health, to the conservation of life, to the wise use of the vital resources of our nation.’ That’s what you all have been doing and that’s what you’re doing today. I think we’ve lived up to Roosevelt’s best hopes…Enjoy the opportunity to appreciate where we are…We exist here on a perfectly beautiful campus.”

Tim Tosten, acting director of the Office of Research Services, launched the event, which starts on the front lawn of Bldg. 1, heads down Wilson Drive and outside the perimeter fence onto Rockville Pike.

Welcome to the 11th annual Take a Hike Day, Tosten said, when we “dedicate time to take our own best advice and encourage healthy behaviors among our federal workforce. Not only does this event promote physical fitness, but also it promotes social interaction, provides community and promotes well-being.”

Tosten recalled that Tom Hayden, the late ORS Division of Amenities and Transportation Services director, developed the hike in 2008 for employees as “a way to get moving and foster esprit de corps of the NIH family.” That year, the event was held in May in conjunction with the National President’s Challenge and the HealthierFeds initiative.

An estimated 15,500 employees have taken a hike since its inception 10 years ago. The event has expanded to include satellite events where other NIH’ers work—Executive Plaza, Fisher’s Lane, Rockledge and Shady Grove.

“We’ve seen an increase in participation at off-campus locations such as Fisher’s Lane and Shady Grove,” noted Shuntrice Holloman of DATS, which organizes the event.

Tosten also noted that the hike this year is part of an overall NIH strategy for its employees to address the five tenets of well-being—community, social, work, physical and financial health.

“The hike incorporates 3 of the 5, so you’re well on your way to adopting all 5,” he concluded.

Perfect weather and bucolic setting aside, the 3.25-mile loop around the campus can still pose a challenge for some normally sedentary souls.

“You’re calling this a ‘little hill?’” quipped a fellow walker.

“It’s all relative, isn’t it?” strider one shot back, to laughs from those alongside.

The walk’s first leg also found itself navigating around an in-process construction site at the Metro intersection at Rockville Pike and South Drive. NIH Police directed traffic and held off vehicles for pedestrians crossing the area. By the second turn, back into the wooded environment near the National Library of Medicine, the street noise fell away and a park-like atmosphere enveloped walkers. It’s by far the sweetest portion of the course—unless you count the almost totally downhill stretch of Cedar Lane.

At water station one, which was sponsored by the Office of Research Facilities and ORF Director Dan Wheeland, volunteers Mahmoud Solhdoust and Terence Lewis welcomed walkers looking for water and a short breather. Other stations were hosted by the cross-institute/center NIH Health & Wellness Council as well as various other ICs. NIA’s Jamie Goldsby and NHLBI’s Kathryn McMurry of the council enthusiastically waved walkers to their station along Old Georgetown Rd.

Organizers report 1,334 registered participants, including 1,080 walkers and 254 runners. NIAID registered the most at 246, with OD second at 200 and NCI third with 182. About 30 volunteers helped out in various capacities. As for number of overall attendees?

“We’re still trying to figure that number out,” said Holloman.

By event’s end, the crew running things had recorded another successful day, with the spirit of collegiality continuing into the afternoon: As DATS gathered for a photo, a still highly energetic group from Medical Arts/Division of Scientific Equipment and Instrumentation Services took over sign-waving, high-fiving and overall cheerleading duties at the finish line. 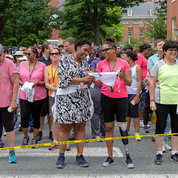 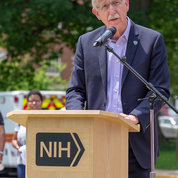 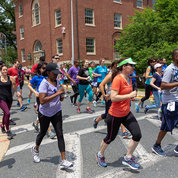 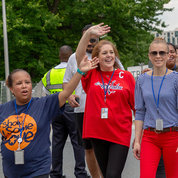 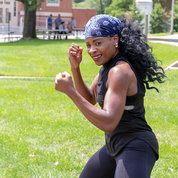 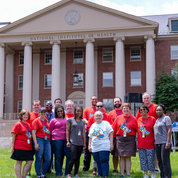 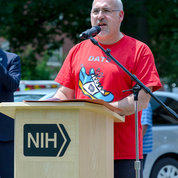 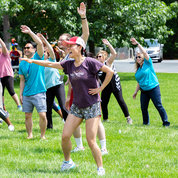