Colleagues, friends and family of Dr. Alan S. Rabson gathered at Natcher Bldg. Oct. 30 to celebrate the life of the distinguished physician-scientist, who provided more than a half-century of service to NIH. Their stories, anecdotes and memories of Rabson, who passed away in July, were of a brilliant, dedicated and, above all, kind man who continues to inspire many in the NIH community and beyond.

Rabson had many roles at NIH, including 20 years working in the NCI Laboratory of Pathology. He served as director of what is now NCI’s Division of Cancer Biology and later became a long-time deputy director of the institute. He was renowned for his scientific achievements, including research on tumor virology and cancer pathology, but also for his leadership style, compassion and sense of humor.

The celebration was fittingly held in Ruth L. Kirschstein Auditorium, named for Rabson’s wife of 59 years. Kirschstein was an eminent NIH scientist as well: the first woman to direct an IC (NIGMS) and she served as deputy director and acting director of NIH before she passed away in 2009.

At the event, NIH director Dr. Francis Collins referred to Rabson and Kirschstein as “the original power couple at NIH.

“[Al] and Ruth, who led so many enterprises, and mentored so many who came through the doors and went away as better human beings as a result, are certainly people that we will always honor and always recognize,” Collins said.

The speakers included many current and former NCI scientists and leaders who knew Rabson as a mentor, a strong supporter and, in many cases, a personal advisor. Several of his former colleagues told stories of calling Rabson after a friend or loved one received a cancer diagnosis and describing how he immediately jumped into action, offering advice and knowing exactly where to refer them.

Rabson also provided guidance to those far beyond NIH. Katie Couric, the journalist and co-founder of Stand Up to Cancer, said that when her husband Jay received the “crushing” diagnosis of stage IV colon cancer, her boss, Tim Russert, told her to “call Al Rabson.

“From that very first phone conversation,” she said, “Dr. Rabson became my comrade-in-arms.” She would call him often, asking about an article she’d read on a new treatment or [scientific] finding, to the point where he affectionately called her “Dr. Couric.” She said that, in many ways, he became her lifeline. And after her husband passed away, she said Rabson continued to support her in her efforts to increase awareness of colon cancer and to be her friend.

Victoria Reggie Kennedy said that through her experience referring a colleague to Rabson and then turning to him when her husband, Sen. Ted Kennedy, and her stepdaughter were diagnosed with cancer, she learned what she calls the four principles of “Rabsonian wisdom.”

Principle 1, she said, is “there is always hope.” Principle 2 is “always get a second opinion.” Principle 3 is “the biggest mistakes in cancer treatment are made at the beginning…so take your time and do it right.” And Principle 4 is “it’s important to go to an academic medical center,” she said.

Because her beloved stepdaughter followed these principles, she said, Cara remained cancer-free until her death 10 years later from an unexpected heart attack. And when Ted Kennedy was diagnosed with glioblastoma, she said Rabson “went into overdrive. We followed the principles of Rabsonian wisdom, and I believe that Teddy had a longer, better quality of life because of it.”

A Mentor and Friend

Many speakers at the event told personal stories, including how Rabson supported their careers in ways great and small.

Dr. Louis Staudt, director of NCI’s Center for Cancer Genomics, shared stories of how Rabson helped him overcome challenges in the lab but also relayed an anecdote that perhaps many NIH’ers can appreciate: When Staudt, who says he’s not a “morning person,” struggled with parking, Rabson let him park in the driveway of his on-campus residence.

Dr. Dinah Singer, director of NCI’s Division of Cancer Biology, said Rabson “was a constant in my life at NIH.” She discussed how he supported novel research and taking risks. She also remembered his generosity and responsiveness. “His phone never seemed to ring more than once when I called,” she said.

NCI deputy director Dr. Doug Lowy credited Rabson with starting his career here. Addressing many NCI staffers in the audience and on stage, he said, “We’re all [at NCI] in large part because of him.”

The speakers shared many ways NIH will continue to honor Rabson. There is already an NIH Director’s Award—the Alan S. Rabson Award for Clinical Care—established in 2012. Collins noted that the award is “specifically given to somebody who has gone out of their way to reach out, out of compassion and knowledge, and help those who come forward asking for assistance in a difficult time.”

Dr. Arnold Rabson told the crowd, “Gratitude is the best antidote for sadness.” Of his father, he said, “He lived his love, and he radiated it to the very end.”

NCI director Dr. Ned Sharpless said that in honor of Rabson and Kirschstein, their home on the NIH campus will serve as an extension of the Children’s Inn at NIH. “Given Dr. Rabson’s commitment to patient care, and to families of patients, I can’t think of a better use for this space,” he said.

Dr. Michael Gottesman, NIH deputy director for intramural research, announced that the board of scientific directors is creating an Alan S. Rabson Memorial Lecture Series, “in which outstanding scientists from his beloved intramural program” will give lectures in his memory at academic medical centers around the country.

The last speaker at the event was Rabson’s son, Dr. Arnold Rabson. He said his father would not have wanted all the fuss about him, “but he would have understood.”

The younger Rabson said he “hit the jackpot of the parent lottery,” and detailed the many lessons he learned from his mother and father. He talked about the outstanding breadth of the scientific papers his father published, and how, in many ways, his father was his best friend and advisor. Like everyone at the event, he spoke of his father’s kindness. “He taught me to value each person I meet, and to take care that they felt better after we were together than they felt before,” he said.

He said that he can’t really say goodbye to his father. In fact, he believes “it’s good that we don’t say goodbye completely, because the world desperately needs who Alan was, and it needs the values that his memory still enlivens in us.” 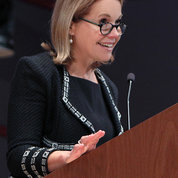 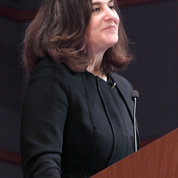 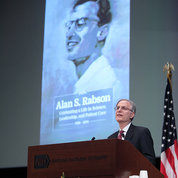 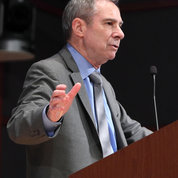 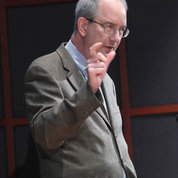 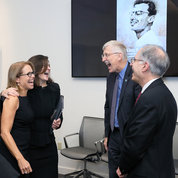 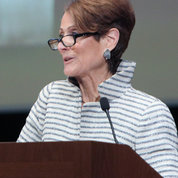