Dr. Emmeline Edwards of NCCIH and her granddaughters Nyomi, 12 and Chloe, 7, celebrate her career in science at NIH.

This year, the Office of Equity, Diversity and Inclusion (EDI) looked down the hall and across NIH. The result is an exhibition of photos and profiles honoring 14 African-American scientists at NIH, plus four scientists from the past.

On Feb. 4, hundreds of people gathered at the National Library of Medicine to kick off “Celebrating the Contributions of African- American Scientists Past and Present.” The exhibition is sponsored by EDI, NLM and the Network of African-American Fellows.

“It is rare to have this many African-American scientists gathered in one place,” said Dr. Christopher Williams, a former NIH postdoctoral fellow and emcee of the event. “They did not set out to rewrite history but instead they focused on completing any tasks that were given to them to the best of their abilities. Now after years and decades of these consistent small victories and repeated demonstrations of excellence, others have taken notice.”

As a cofounder of the Network of African- American Fellows and the STEM education specialist at the National Museum of African-American History, Williams spoke of the importance of sharing the success stories of African Americans working in STEM.
Dr. Roland Owens, honoree and assistant director of NIH’s Office of Intramural Research, provided some historical perspective.

“As of October 1, 2018, only 10 of the NIH intramural research program’s 817 tenured senior investigators self-identified as being of black African descent,” he said. “We have made progress over the last 60 years, but clearly not enough.”

In his work with EDI’s black employment committee, Owens said that one consistent barrier is the lack of visibility of role models for black youth. “Because many African Americans have first and last names that are European, we have often been invisible contributors to the biomedical research enterprise,” he said. “Even in these days of web sites and social media, it can be difficult to find images of black scientists unless you know exactly where to look…It is our desire that black scientists, postdocs, students and everybody will look at these pictures and posters and say, ‘Hey, if they can do it, so can I.’”

Before recognizing each honoree, NLM director Dr. Patricia Flatley Brennan spoke of the importance of the exhibition and how the honorees represent 10 institutes and OD.

“What an amazing, knowledgeable and impressive group,” she said.

After applause for each scientist, the guests gathered for a ribbon-cutting ceremony and unveiling of the portraits.

This was the part of the program that Chloe Edwards, 7, was looking forward to the most. As she waited by the portrait of her grandmother Dr. Emmeline Edwards, director of the Division of Extramural Research, NCCIH, Chloe held a book called Bold Women in Black History so her grandmother could sign it.

For Victoria Gross, a principal strategist for EDI and organizer of the event and the exhibition, “This was a 5-year dream come true. Having this much talent in one room was breathktaking.”

The exhibition will remain on display outside Lister Hill Auditorium in Bldg. 38A throughout February. 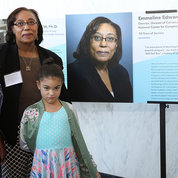 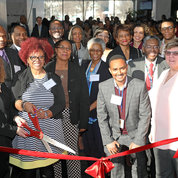 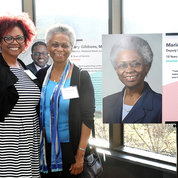 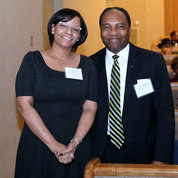 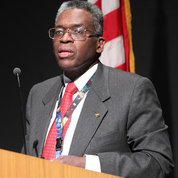 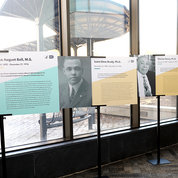