A Vision for Child Health

Biographies abound of the Kennedy family, yet one didn’t exist about one of its seminal members, Eunice Kennedy Shriver, until now.

In Eunice: The Kennedy Who Changed the World, biographer Eileen McNamara depicts Shriver—the daughter of Joseph and Rose Kennedy—as a savvy, complicated, tenacious woman who had devoted her life to several causes. Often remembered as an advocate for people with disabilities, Shriver has another great, often unsung legacy: the lifesaving prenatal and child health research of her namesake institution—the Eunice Kennedy Shriver National Institute of Child Health and Human Development.

“The Special Olympics is what we remember her for,” said McNamara, chair of the journalism department at Brandeis University and a Pulitzer Prize-winning columnist, at a recent fireside chat with NICHD director Dr. Diana Bianchi in Lipsett Amphitheater. “[Another] reason Eunice Kennedy Shriver changed the world is because of the work that gets done here [at NICHD] now.

A Champion for Child Health

Shriver had the foresight to realize that children might have distinct medical needs, said McNamara. So one sunny day in 1961, Shriver took her brother, President John F. Kennedy, sailing on Nantucket Sound and suggested that perhaps Jacqueline Kennedy’s recent miscarriage and a stillborn birth in 1956 had medical causes. She convinced the President to recommend a federal institute for prenatal, neonatal and child health research.

“She didn’t dream it up,” said McNamara, “but she latched on to good ideas and used her influence to push them forward.”

In 1963, a year after NICHD’s founding, President and Mrs. Kennedy lost another baby. Patrick was barely 2 days old when he died of a respiratory syndrome that took the lives of more than 20,000 premature babies annually back then. Today, thanks to treatments developed by NICHD, few infants die from this syndrome.

In 2008, NICHD was dedicated to Shriver, who attended the ceremony with much of her family. Shriver passed away a year later.

When McNamara’s editor suggested she write a biography of Shriver, McNamara initially was reluctant. She hadn’t known Shriver personally and heard she was a formidable character.

“If you’re a reporter for 30 years at The Boston Globe, your natural instinct is to run away from the Kennedy family, not to run toward [them],” said McNamara. “Not for any lack of respect but…they’re not particularly trustful of journalists; they’ve not always been well treated by my ilk. And they’re also litigious.”

McNamara would need access to all personal papers as well as cooperation from the five Shriver children who, for the sake of impartiality, wouldn’t get to read the manuscript in advance.
The whole process took 7 years, she said, “most of it spent convincing them I wasn’t going to do a hatchet job on their mother…that they should trust me,” and arranging access to the papers, which were disorganized, in storage at the Kennedy Library.

The story McNamara then uncovered was that of an educated, driven, complex woman. Shriver’s ambition was overlooked by her parents, who thought her role should be promoting her brothers’ political careers. But she carved a place for herself by taking the helm of the Joseph P. Kennedy, Jr. Foundation in the 1950s, refocusing its resources toward researching mental and intellectual disability.

“Who among [the Kennedy family] can say they took a population that was reviled and hidden in the shadows and liberated them from stigma and shame?” asked McNamara. “What makes the Special Olympics [which Shriver founded] such a remarkable contribution is that, for the first time, we were celebrating these children, not hiding them.”

Shriver had a close relationship with her older sister Rosemary, who inspired her advocacy for people with disabilities.

“Some of it was out of altruism; not a small part of it was out of guilt,” said McNamara. Rosemary, who had intellectual disabilities and an undiagnosed mental health condition, was left incapacitated after a failed lobotomy as a young woman and was later institutionalized.

"Nobody ever met her expectations,” said McNamara of Shriver, “so keep working on it; she’s watching.”

Shriver’s goodwill also extended to other groups who had nobody to speak for them. She once lived in a women’s federal penitentiary to document injustices. She also recruited inmates from a juvenile detention center to serve as camp counselors at Camp Shriver for disabled children in her own backyard.

“Only Eunice would think that was a good idea,” said McNamara, “because can you think of two more marginalized communities than prison inmates and intellectually disabled children?”

McNamara’s biography highlights Shriver’s many dichotomies. She was physically fragile, yet competitive, determined to be the best mariner, the best athlete among her siblings.

She was a compassionate humanitarian, yet an intractable human. “She expected everyone to have the same sense of urgency that she had. It made her bristly,” said McNamara. “She went through assistants the way the rest of us go through tissues when we have a really, really bad cold.”

Bianchi shares a light moment during her conversation with McNamara.

Meanwhile, Shriver’s children all grew up to be compassionate people. Perhaps, suggested McNamara, the nurturing came from their father, Sargent.

“His love letters were the most beautiful I’ve ever read; they were in those boxes [in storage],” said McNamara. “The kids had never read them.”

Luckily for Sargent, Eunice never fulfilled her aspiration of joining the convent. A deeply religious woman, she admired working nuns for their commitment to social reform and tirelessly worked her entire life to promote social justice.

In the end, Shriver’s advocacy for child health stands among her greatest legacies.

“That’s the piece of her biography that gripped me the most, that she had the prescience to see what we were not doing” and push for needed research, said McNamara. “She was so far ahead of her time.” 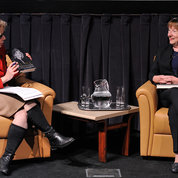 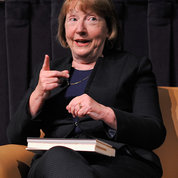 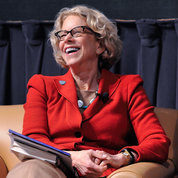 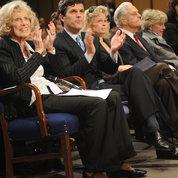 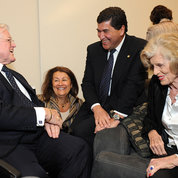 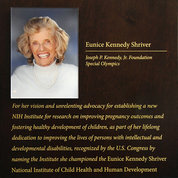