Science talks. Nature walks. How does blood clot? Meet a robot. Hearts, brains, bones, even see a spleen. Earth Day shows us how to be green.

Kids of all ages had a blast learning about the amazing science that happens across NIH at the 25th Take Your Child to Work Day. Nearly 4,000 students from grades 1-12 were registered for some 200 activities on and off campus, with plenty more kids in tow, including smaller ones, who participated in the various open-access events.

Around the Clinical Center, an annual favorite is Fantastic Voyage, run by the department of laboratory medicine. Youngsters dressed in scrubs rotated among several tables to learn about blood and microorganisms.

“That stuff is really gross,” exclaimed Addie Soper, 6, who learned a lesson in hygiene after seeing the dishes. “I learned to wash my hands because they showed me what they look like before and after you wash them.”

Over in the neuroscience MRI lab, NIMH fellows hosted older kids throughout the day.

“When we learn new things, that helps your brain change and develop,” said postbac fellow Gabrielle Reimann, whose lab is studying which parts of the brain become activated during learning. Brain regions light up on MRI depending on the amount of blood flowing to them, she explained.

The kids then played a game of guess the fruit or veggie based on its MRI cross-section. Next door, they took turns lying still for a mock MRI scan.

“It was a real experience, learning what would happen if I was in a real MRI,” said 5th grader Zorin Petrow, an aspiring space engineer. “And they explained how it works, how the MRI shows the hydrogen atoms moving all around, attracted to the magnet.”

Elsewhere in the Clinical Center, some older kids got a close-up look at preserved human organs in NCI’s pathology lab.

Pathology resident Dr. Hong Jiang described each sample as some brave kids wearing gloves touched and held different organs. Among them was the brain of a stroke patient, a diseased liver and the black, spongy lung of a smoker with lesions from emphysema.

Kids learn about and touch preserved human organs while their parents look on in NCI’s Pathology lab.

“After the surgeon cuts out a tumor, our lab tells the surgeon if it’s benign or malignant,” said Jiang. “We can even tell how fast the tumor is growing when it’s fresh...The doctor may then refine treatment based on the sample studied.”

The @NIH Twitter account live-streamed a later session of the pathology lab presentation. The other Twitter live-stream video event that day was hosted by OD, which gave 25 kids the chance to be investigative reporters at a mock press conference held in Bldg. 31.

The kids met SIPPC, a small robot designed to help babies with mobility issues learn to crawl. Dr. Alison Cernich, director of NICHD’s National Center for Medical Rehabilitation Research, introduced the robot and its inventor, Dr. Peter Pidcoe, an NICHD-funded scientist who is director of the engineering and biomechanics lab at Virginia Commonwealth University.

A few kids then got to try out SIPPC, wiggling the leg of a stuffed animal, which moved the lightweight, battery-powered plastic robot.

OD science writer Dr. Tianna Hicklin encouraged the kids to ask questions. It’s the job of a good science reporter, she said, to help the public understand complicated ideas by describing the science in plain language.

Soon, many hands went up. Budding reporters asked Pidcoe how he came up with the idea, how long it takes a baby to learn to use SIPPC and—something he hadn’t previously considered—whether it could be used for animals.

Kids of all ages enjoy a controlled bubbly explosion conducted by the Science Guys of Baltimore at the FAES Science Fair on the FAES terrace.

Many kids especially enjoyed meeting and petting live animals—from turtles and snakes to Spike, the baby gator—brought over from several animal refuge and preservation groups. They were part of the many Earth Day exhibits at Natcher Bldg., which included recycling games, displays with eco-friendly tips and a honeybee exhibit.

Kids of all ages went home inspired, while their grown-ups left work stimulated, but perhaps tired. 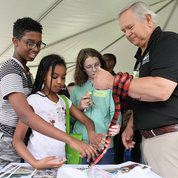 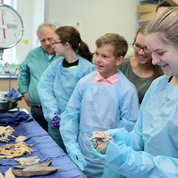 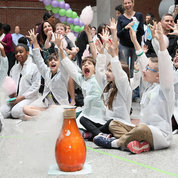 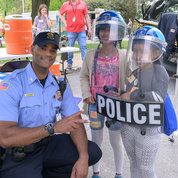 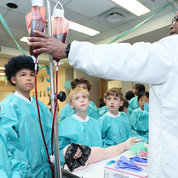 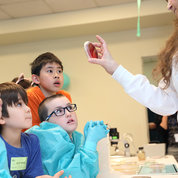 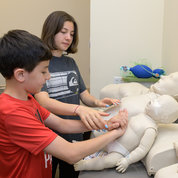 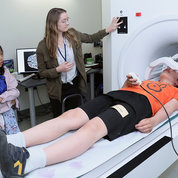 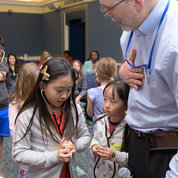 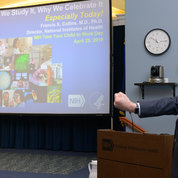 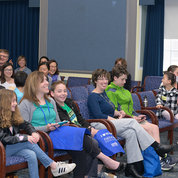