It was a gorgeous morning for a bike ride. Under sunny skies, hundreds of NIH’ers pedaled to work for NIH’s annual Bike to Work Day on May 17. For many, the event helps kickstart their bike commuting season.

“This is my kickoff event; then I bike to work twice a week till winter,” said NIAID biologist Catherine Rehm, who biked 18.5 miles from Gaithersburg. “It’s a great way to start the day. I feel relaxed, happy, ready to go, and I think I’m more productive [after biking in].”

Rehm’s NIAID colleague France Galindo also launched her bike-to-work season that day. Galindo, who typically bikes once a week from Capitol Hill, reminisced, while sipping coffee from the refreshments tent, about the beauty of biking in along the Capital Crescent Trail.

“In the early morning,” she said, “it’s quiet and shaded; you see all kinds of wildlife and you get amazing views of the river.”

NIH director Dr. Francis Collins had a less scenic view on his ride, which would normally traverse the Georgetown Branch Trail, now closed due to Purple Line construction.

“It’s not as scenic as it used to be, but it’s still great exercise and on a beautiful day, what could be better?” said Collins, who biked from Silver Spring with his wife, Diane Baker, and daughter Dr. Margaret Collins, who was visiting from North Carolina.

Collins said he had an early-morning opioid crisis meeting that prevented him from lingering at the event, adding, “That’s what we do here at NIH. We work hard, we play hard and we try to keep our bodies in shape, and this is what biking to work is all about.”

Bike to Work Day is also a time to pay tribute to NIH cycling proponents gone too soon. Collins remembered former labmate and cycling enthusiast Peter Chines, who passed away 2 years ago. And every year, the NIH biking community honors Carl Henn, who co-founded NIH’s Bicycle Commuter Club (NIHBCC), by presenting a namesake award to an avid cycler/advocate.

This year’s Carl Henn Bicycle Advocacy Award was presented to NCI’s Dr. Ian Fingerman, who bikes from Old Town Alexandria, Va., to campus most workdays, then rides the shuttle to NCI-Shady Grove. A few times a month, he bikes the entire way, 28 miles, from Old Town to Shady Grove.

“I’m a strong advocate for bicycle commuting and encourage my colleagues to give it a try,” said Fingerman. “I commute by bike as much as I reasonably can. The only thing that keeps me off my bike is torrential rain.”

Steve Friedman, NCI Surveillance Research Program manager, who nominated Fingerman, said, “Ian’s dedication to biking every day in all weather conditions for such distances is advocacy in action. He inspires others by showing that perceived obstacles to bike commuting can be overcome.”

Dr. Prashant Chittiboina of NINDS’s Surgical Neurology Branch rides in on his electric cargo bike with his kids.

This year, 566 NIH cyclists pre-registered for Bike to Work Day, the highest registration in 5 years. Many cyclists stopped by the maintenance tents where local bike shop staff inspected their bikes. NIH Police were also on hand to register them.

The average commute to NIH that day was 6 miles, according to Sean Cullinane, quality assurance specialist with the Office of Research Services’ Division of Amenities and Transportation Services (DATS). CSR’s Dr. David Winter wishes his commute was longer. “It’s 7 ½ miles, but I try to make it 10,” said Winter, who bikes in 2-3 days a week from Silver Spring and typically puts 1,000 miles a year on his bike.

The longest bike commute to campus was 27 miles. In total, bikers who attended prevented more than a metric ton of carbon dioxide from entering the atmosphere.

“Don’t make [biking to work] a one-day thing,” Collins advised the assembled cyclists. “Make this something you do as often as you can.”

NIH’s Bike to Work Day is co-sponsored by DATS and NIHBCC. The event is part of an area-wide tradition with 117 pit stops in the DMV sponsored by the Washington Area Bicyclist Association.
To register your bike with the NIH Police, email alvin.maker@nih.gov. 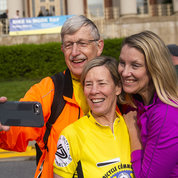 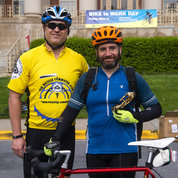 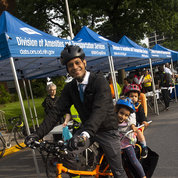 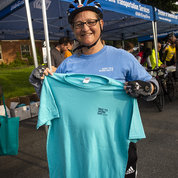 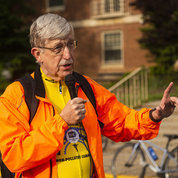 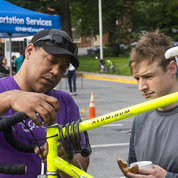 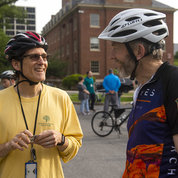 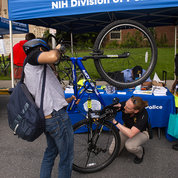