A few months ago, a tense situation was unfolding at NIH’s Gateway entrance. A visitor was demonstrably angry and refusing to leave. When law enforcement answers such a call, myriad different resolutions can result—many of them unfortunate or even tragic. On this day, when NIH Police responded, something good happened.

“That story ends with a fist bump,” recalled Sgt. Alvin Maker. “We started with ‘irate person’ and ended with ‘happy patient.’”

Turns out, the visitor, newly diagnosed with cancer and looking for the Clinical Center, was lost. Growing increasingly more frustrated, he’d gone from entrance to entrance, only to find that—due to the pandemic—he could not enter campus and get to the hospital via Gateway. In short order, Maker calmed the man down, confirmed that he was an NIH study participant, led him to the correct screening point for patients and escorted him to the CC.

“We definitely embrace the community policing mindset,” explained Maker. “I feel like NIH will be that beacon of light for the future…Other police agencies can use our example for how we’re supposed to police…I feel like [NIH] is going to be my forever home in my career.”

The Sept. 10 Zoom call was the latest stop on Collins’s “Gratitude Tour” in which the director pays tribute to groups and individuals who have provided outstanding service, particularly during recent fraught conditions.

“I’m especially honored to have this opportunity to express my deep appreciation for all that you do every day to protect NIH,” Collins said.

With Office of Research Services Director Colleen McGowan as moderator, Bill Cullen, associate director for security and emergency response, opened the call with an overview.

“NIH police officers safeguard our research community 24-7, 365 days—in spite of the weather, government shutdowns or the unfortunate realities brought about by the current pandemic,” he said. “Their commitment and professionalism in conducting their duties is truly an asset to our agency.”

About 58 percent of NIH officers represent ethnic minorities, Cullen said. The force is a blend of second-career officers “who bring a wealth of experience, street smarts and maturity” from their previous service to local jurisdictions and first termers who bring an abundance of enthusiasm and desire to succeed.

“They challenge us to think differently, advocate for the most up-to-date equipment and generate innovative ways to solve problems,” he said. “We charge each of our officers with safeguarding and protecting our valuable resource—our people. Each interaction an NIH police officer has—no matter how difficult it may first appear—must be executed with courtesy and respect.”

Led by NIH Police Chief Alvin Hinton, several other officers were tapped to share stories about working at NIH.

Led by NIH Police Chief Alvin Hinton, several other officers such as Maker were tapped to share stories about working at NIH.

“I knew all the researchers and doctors had great technical knowledge and experience but the thing I most admired about them was the sense of humanity and compassion they always display to everyone no matter what their circumstances,” said Hinton, describing what he observed both as a family member of a CC patient and as someone treated there himself. “This behavior has now been embraced by the Division of Police personnel who I also admire and greatly respect.”

Hinton also noted the “exhilaration our officers displayed about Dr. Collins taking the time to meet with them.”

Before Covid-19, NIH security processed roughly 625,000 visitors per year (about 52,500/month) at Gateway and the Commercial Vehicle Inspection Facility (CVIF), and 66,000 per year (approximately 5,500/month) at the patient entrance.

Dispatchers at NIH’s Emergency Communications Center handle about 12,000 9-1-1 calls and 221,000 non-emergency calls every year, before everything changed March 2020 with the need for different safety approaches amid Covid-19.

During the pandemic—though routine main campus occupancy decreased sharply due to maximum telework and quarantining—an average 6,550 visitors and 3,524 patients per month still were processed by NIH security whose own workforce was also affected by the unprecedented worldwide crisis. They went from three 8-hour shifts to two 12-hour shifts on March 10, 2020, to account for personnel shortages.

Also, the K9 unit increased operations, as many buildings are sparsely populated or entirely vacant. During the pandemic, K9 teams have conducted 1,481 building patrols, 259 vehicle inspections and 12 suspicious package scans.

In the first 18 months of the pandemic, there have been 15 demonstrations on or near NIH property; the annual average over the past 10 years was 2 events a year.

NIH detectives investigated more than 36 security concerns or threats made against NIH scientists. Also, NIH Police coordinated a protective detail with HHS’s Office of Inspector General for NIAID director Dr. Anthony Fauci, due to the frequency and virulent nature of threats made against him.

Maj. Patricia Haynes established entry control procedures for the main campus as well as several other NIH facilities; Master Patrol Ofcr. (MPO) Brad Rupert (affectionally known as the mayor of the Clinical Center) became nearly a permanent fixture at the hospital, offering suggestions to improve security especially when Covid came and the need to secure entrances increased; and Maj. Josh Minix, Haynes and Lt. Lawrence Brown all helped coordinate with the Secret Service on several extremely high-profile visits that included two U.S. presidents, a vice president, a First Lady and the HHS secretary.

Other officers who spoke on the call were 21-year NIH veteran Lt. Craig Rowland, commander of the criminal investigations unit (CIU); 16-year NIH’er Sgt. David Warren, also of the CIU; and Lt. Brian Simms, who began as a security guard and now commands the CVIF. MPO Derek Jeter had also been set to speak, but was called into duty at the CC.

Collins, joined on screen by wife Diane Baker, said every time he visits with a group that makes NIH the amazing place it is, he comes away feeling more grateful and “blessed to be part of this family.”

“Please know how much we appreciate your dedication to keep the NIH family safe,” he concluded. “You inspired us today.” 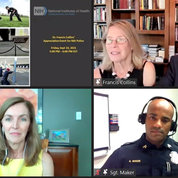 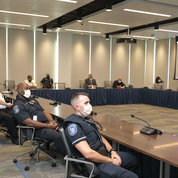 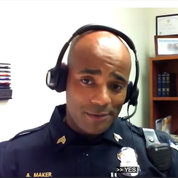 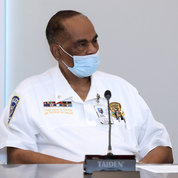 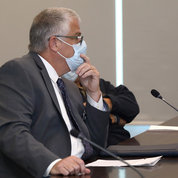 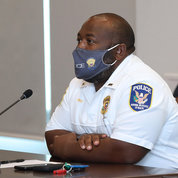 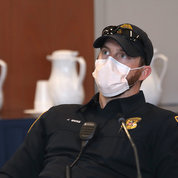 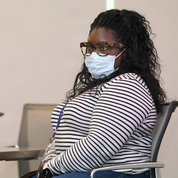 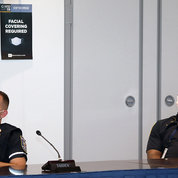 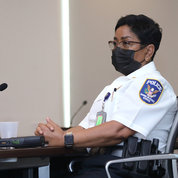 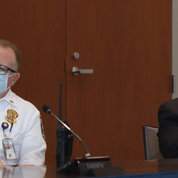 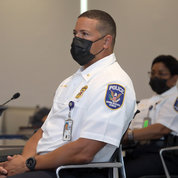 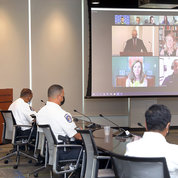