“Who’s ready to move today?!” challenged Tammie Edwards before the start of the 14th NIH Take a Hike Day on June 16. Several hundred NIH’ers descended on the Bldg. 1 lawn that afternoon, basking in the opportunity to walk or run in the sunshine, excited to see, or meet for the first time, colleagues they hadn’t seen in person since the pandemic began.

Edwards, director of ORS’s Division of Amenities and Transportation Services, introduced NIH deputy director for management Dr. Alfred Johnson, who arrived in a suit and tie, fresh from the final DDM seminar of the season. In past years, Johnson enthusiastically joined hikers for this event, but duty called that day and he had to rush off to a meeting.

The pandemic derailed hiking in person the last 2 years, “but it’s time to be back out to regather and do what NIH does best,” said Johnson in welcoming remarks, “and that’s to take our own best advice—to have a life of well-being that includes exercise. And this 3.25-mile hike is a way to get started.”

As participants assembled and the group began to build, NIH fitness instructor Shannon Oussoren led a pre-hike warm-up, helping dozens of NIH’ers stretch their hamstrings under the shade of a big tree.

Johnson reminded the group to bring their badges to re-enter campus, as the route winds around the perimeter, in large part off-campus. That prompted a handful of would-be hikers to dart off in different directions to their offices and later rejoin the hike.

Johnson then called out, “Stay safe! Have fun!” and the runners and hikers took off.

“I was so excited about the hike today,” said CIT’s Michael Castro, IT support services team lead, who started working at NIH in summer 2020 and for many months came in regularly to a largely barren campus. “I thought: community event, yay! Events like these are amazing, getting together and feeling like we’re part of something bigger than ourselves.”

Another first-time hiker, NIA’s Dr. Alice Kaganovich has worked at NIH for 15 years but never made it to this event. “It was tough to schedule in the past. I have so many things to do at work,” said Kaganovich, who works in a Bldg. 35 lab that studies Parkinson’s disease. “But this year I decided to come out for this.”

Walkers prepare to take stride on a weather-perfect “Take a Hike Day” 2022.

Several groups of colleagues embarked on the hike together as a team-building exercise. NCI’s Dr. Andres Lebensohn and his lab mates from Bldg. 37 brought along a future colleague who begins her job in a few weeks.

A group of eight from NIMH also enthusiastically joined the hike. None of them usually come to the office on Thursdays but they adjusted their schedules for the event.

“I’ve missed this and am excited it’s back on,” said NIMH’s Kimberly Blackmon, who has worked at NIH for 13 years.

“For a lot of us, it’s our first time back on campus in 2 years and this event feels like [a step] toward a return to normalcy,” said Matthew White of NINDS’s data management section, whose group came for the event from their off-campus Executive Blvd. offices.

“I love fitness. This is one of my favorite events here,” said India Taylor, ORS Medical Arts production lead who remained on campus throughout the pandemic creating and updating safety signage. “This one was smaller than in the past but it’s nice to see the progress and feel some sense of community again.” 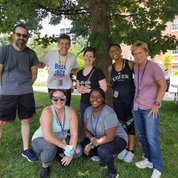 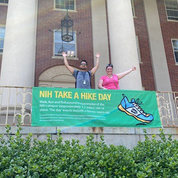 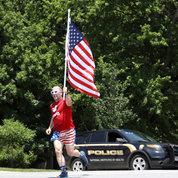 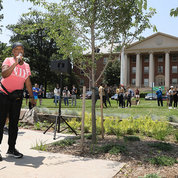 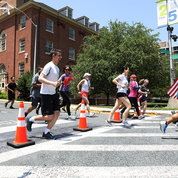 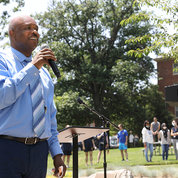 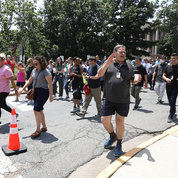 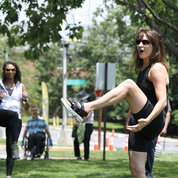 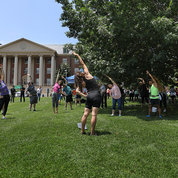 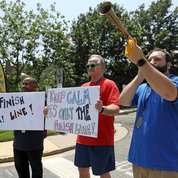