Food donated in the Bethesda area was directed to three organizations: the Capital Area Food Bank, and two familiar on-campus organizations, the Children’s Inn and the Safra Family Lodge. Spike Harrison of the Office of Acquisition and Logistics Management served as donation team lead and travelled weekly to 52 donation boxes, picked up all items and prepared them for distribution. Volunteers sorted and set aside foods in high demand for inn and lodge residents.

Roxane Burkett of NHLBI shops for donations during the institute’s “walk to Giant” activity, which garnered more than $200 toward the effort.

NIH coordinator for the program Corey Welcher noted that the entire agency actively participated in the campaign from the Bethesda campus and beyond.

“I’m very happy to see a broader participation,” she said. “Outside of the D.C. metropolitan area, NCI in Frederick, NIDDK in Phoenix, NIDA in Baltimore, NIEHS in Research Triangle Park and NIAID in Hamilton contributed almost 7,200 pounds to local food banks and homeless shelters in their respective areas.”

Many individual offices and ICs took initiative by introducing competitions and unique events to raise awareness and donations.

ORS’s Division of Occupational Health and Safety organized an intra-office competition that raised 1,090 pounds, while NIDDK instituted a “Battle of the Buildings” Team Challenge that brought in more than 1,740 pounds.

NHLBI’s Office of Acquisitions at Rockledge combined its desire to do good with a workout by taking a “walk to Giant” as a team and purchasing items for donation. Leadership at NCI-Frederick really went above and beyond: Three bosses took part in a “Free Your Boss” event. Drs. Craig Reynolds, Joel Schneider and David Heimbrook were “locked” in their offices until staff raised “bail” of at least 50 pounds of donated food. Staff did not cruelly leave their bosses locked away and they’d raised 372 pounds by lunch.

ORS partnered with Eurest Dining Services for a second year on the successful “Fighting Hunger Vouchers” program. Cafeteria customers could purchase $1, $3 and $5 vouchers to go directly to purchase food for the drive. Sushi with Gusto, a vendor at the cafeterias, even offered a portion of its sales to purchase the vouchers. The program raised more than $5,000, which was used to buy 7,500 pounds of food.

The campaign ended on Aug. 31. Volunteers came out to encourage final donations with two “Fill the Truck” events on Aug. 30 and 31 outside Bldg. 1. Staff supported the program to the very end and are already thinking up ways to continue this year’s success in 2017.  Thanks again to all who participated in providing food to individuals in need. 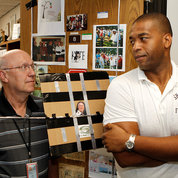 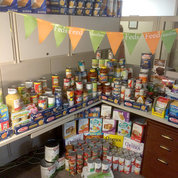 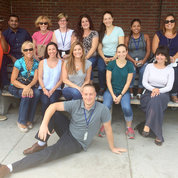