NIH director Dr. Francis Collins (l), flanked by ACD member Dr. Jose Florez of the Broad Institute of MIT and Harvard, told the group that he thought last December’s ACD meeting might have been his last.

Two days before the 114th meeting of the advisory committee to the NIH director on June 8, the President invited NIH director Dr. Francis Collins to remain in that post permanently.

“I am grateful and honored to have received that invitation,” said Collins, who had been serving as a holdover appointment since Jan. 18, “and I am happy, along with my wife Diane, to accept it.”

The news was met with a round of applause before the ACD got down to a 2-day agenda that included announcement of the Next Generation of Researchers Initiative (NGRI) to support early and mid-career investigators; presentation of NIH’s efforts to reduce the nation’s opioid epidemic; and an argument for an accelerated pathway toward a universal influenza vaccine.

Not Ready for Prime Time

Collins traced the half-year history of the effort to reallocate NIH funding for early and mid-career scientists in a more optimum way, starting with what was known last fall as the Research Commitment Index. That effort, known temporarily as RCI, later morphed into the Grant Support Index, or GSI.

“[GSI] created quite a lot of interest—not all of it positive—about as much as I’ve seen in a grants funding policy in 8 years,” said Collins. “We did hear significant concerns about the validity of the index, and how it might discourage collaboration.” It became apparent, he said, that “the GSI approach is not ready for prime time.”

Of the brouhaha that accompanied proposal of the GSI and its subsequent removal from the table, NIH principal deputy director Dr. Lawrence Tabak, who had outlined the plan before some 19 advisory councils in recent months, said, “This is the way this is supposed to work. Maybe there was some tension involved, but as the saying goes, without tension, there is no music.”

Both the NIH-Wide Strategic Plan, which Tabak was involved in drafting, and the 21st Century Cures Act, call for creation of NGRI, which will extend the payline for early-stage investigators.

NGRI will also “prioritize support for those about to lose all NIH support and who are maybe likely to leave the workforce,” said Tabak. It will also give a boost to those going for their second RPG, but who just missed the payline, the so-called “rising stars,” he added.

NGRI is estimated to require about $210 million per year for 4-5 years, or a total of about $1.1 billion, Tabak continued. Inasmuch as NIH is not in the business of printing money, he quipped, the funds will come from reprioritization of budgets by the institute and center directors.

“We tried to create a simple framework [GSI],” Tabak explained, “but it would not capture the incredible complexity of modern team science.”

Ironically, the $1.1 billion in reallocated funds matches almost exactly the recommendations of an independent analysis of the same subject published in the Proceedings of the National Academy of Sciences just days before the ACD meeting, noted Dr. Michael Lauer, NIH deputy director for extramural research.

Dr. M. Roy Wilson (l) said the language of some critiques of GSI received at NIH was “really inappropriate.”

Among concerns about limitations of the GSI approach—including that “a formula-driven approach to evaluating individuals flew in the face of…long-standing principles of making decisions based on individual merit,” said Collins—is that GSI “offered no assurance that redistributed funds would go to early-stage investigators,” said ACD member Dr. Richard Lifton, president of Rockefeller University. “The money could go from a 60-year-old with 6 grants to another  60-year-old with 2 grants.”

“I have never seen anything like this drug crisis in my career,” said NIDA director Dr. Nora Volkow, who described a burgeoning U.S. opioid epidemic notable for three things: an “enormous number of people dying daily”; an origin in the health care setting itself, with a “massive over-prescription of medications” that, ironically, “hasn’t improved outcomes for those in pain”; and the sheer width of the problem—“This crisis affects everybody, including those never exposed to drugs before.”

Volkow said that, even though opioid prescriptions have been decreasing since 2010, fatalities are still increasing. Opioid overdose is the leading cause of death in those age 50 and younger, she said.

“I know of no medical or dental schools that require opioid training,” noted Dr. M. Roy Wilson, president of Wayne State University. “I intend to start it at Wayne.”

Chasing After Pandemics Is Costly

NIAID director Dr. Anthony Fauci made a vigorous case for aggressive pursuit of a universal flu vaccine, given that seasonal flu vaccines are not consistently effective (in a good year, they offer 60 percent protection; in a bad year, none) and that chasing after a potential pandemic is both costly and ineffective.

“We shouldn’t be chasing each year and then waiting for the big surprise,” he said, noting that a late June meeting sponsored by NIAID would convene the best and brightest in the field.

Dr. W. Ian Lipkin (c) thinks a flu vaccine that reduces mortality is valuable, even if it can’t prevent the illness.

Of the universal vaccine effort, he said, “We’re going to do it with the resources we have, which is not a lot. We may have to reallocate some resources.”

Some private funding may become available from a group of philanthropists that met recently in Palo Alto to discuss promising technologies such as a universal flu vaccine; Fauci addressed that group via video.

ACD member Dr. W. Ian Lipkin, a professor of epidemiology at Columbia University, attended the meeting and expressed optimism. “A reduction in [flu] mortality might be a goal,” he noted, “not necessarily prevention.”

Concluded Fauci, “Chasing after potential pandemic outbreaks costs a stunning amount of money—billions of dollars. It doesn’t make any sense not to invest a fraction of that on universal flu vaccine research.” 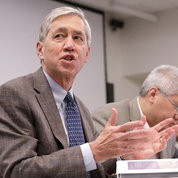 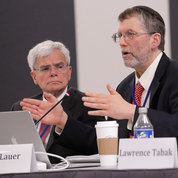