New Health and Human Services Secretary Alex Azar, who was sworn in on Jan. 29, views himself as a conductor of a symphony orchestra. He says his role isn’t to be the best violinist, but to get the best violinist to play his or her best and work in harmony with the rest of the orchestra.

“Whatever crisis comes our way—and there will be crises—my job is not to solve it, but to harness the incredible team we have at this vast, vast organization to conquer that crisis,” he said at a Mar. 20 Town Hall meeting in Masur Auditorium. “That’s a different task than feeling the need to do it yourself.”

HHS is “one-fourth of the U.S. government. I calculated the other day that if you stacked us up against [all other] governments, at $1.2 trillion we are the fifth largest nation on Earth. We are bigger than the British Empire,” he said. “We have been given a lot and to whom much is given, much is expected. And with $1.2 trillion, we have a lot that we must deliver on.”

Azar said that as the premier biomedical research agency in the world, NIH plays an important role in helping HHS meet its mission of enhancing and protecting the well-being of all Americans. The agency has support from people around the country and from its leaders.

While on his first official visit to campus, Azar met with NIH leadership, toured labs and was introduced to patients.

Azar also said it’s important “we not get complacent just doing things the way we’ve always done.” He encouraged staff to work within a resource- or choice-constrained environment. Employees should challenge orthodoxies and think of options they’d never considered, he said.

“Every single dollar that we save is a dollar in R01 [an NIH research project grant program] funding that we can put out there,” he said. “Every couple hundred thousand dollars is maybe a young researcher who can get a grant who otherwise wouldn’t be able to get a grant.”

Tackling the opioid epidemic will be a key priority for Azar during his time as Secretary. Addiction is a “medical condition, not a moral failing by those involved,” he said. “We need to use science and evidence-based methods of treating those who have fallen into the trap of addiction.”

One of those methods is medication-assisted treatment, which provides addicts with one of several pharmacologic options, usually combined with social and behavioral interventions.

“We need to be constantly studying what works, disseminating the best information about what works, the best practices among the states,” he said. “We’re going to be putting a lot of money out there.”

Azar said he spoke recently with the President about the possibility of vaccines for opioid addiction and influenza and immunotherapy for cancer. The President “cares deeply about the mission of NIH and the science that you all are advancing,” he reported. 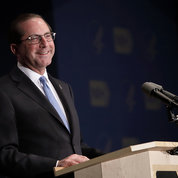 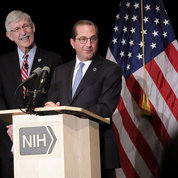 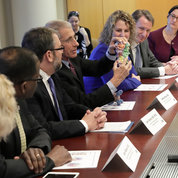 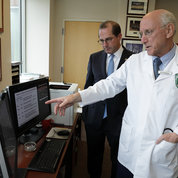 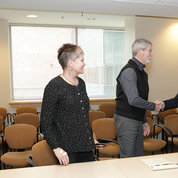 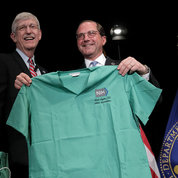