NEI Tops Off 50th Anniversary By Peering into Future

By BY KATHRYN DEMOTT

Dr. Doris Tsao speaks at a symposium offering a glimpse of what the next 50 years in vision research may bring.

Capping off a year of events commemorating its 50th anniversary, the National Eye Institute recently hosted the “Future of Vision Research,” a symposium featuring a glimpse at what the next 50 years in vision research may bring.

“Tremendous advances in regenerative medicine are coming quickly,” said NEI director Dr. Paul Sieving. “Building on these advances will require new functional imaging and computational tools to help us further our understanding of how the eye and the visual system work.”

California Institute of Technology neuroscientist Dr. Doris Tsao described her work to crack the code by which the brain sees visual objects. She considers faces to be a kind of Rosetta stone for decoding how the brain recognizes objects. About 15 years ago, using functional magnetic resonance imaging, she discovered “face patches” in the brains of macaques, referring to six regions within the primate’s brain that lit up when they were shown faces.

She has since discovered that a mere 200 neurons are required to parse the variables of any face. “People often say a picture is worth a thousand words, and I would add ‘or 200 neurons,’” Tsao said.

As for the future, she said that the biggest challenge will be understanding the active aspect of vision. That is, “what we see depends not only on what’s falling on the retina, but also on our internal knowledge and expectations.”

On another front, researchers at NIH are growing 3-D models of eye tissue to study how eye diseases start and to test potential treatments, said Dr. Kapil Bharti, a Stadtman investigator and head of the NEI unit on ocular and stem cell translational research.

The tissue can also be grown on a biodegradable scaffold to replace areas of the retina that die in diseases such as age-related macular degeneration, a leading cause of blindness among people age 65 and older. Plans are underway to launch a clinical trial of the replacement cell therapy to treat patients with geographic atrophy, the “dry” form of AMD.

For studying diseases, there’s no substitute for watching cells interact and function with each other, noted Dr. Johnny Tam, Stadtman investigator and head of the NEI clinical and translational imaging unit. But conventional technologies for studying cellular-level detail in the eye of a living person are limited by distortions to light as it passes through the eye’s cornea, lens and the vitreous gel in the center of the eye. Even at high magnification, the cells at the back of the eye appear blurry.

“You turn on adaptive optics and now you see details that you didn’t see before,” he said. With this new view, scientists can study diseases at the cellular level. It opens up a new window on exploring how to potentially stop or reverse disease progression.

The symposium can be viewed at https://go.usa.gov/xPAet. 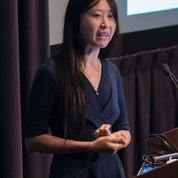 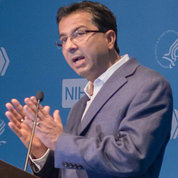 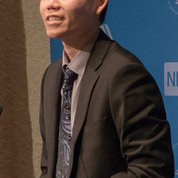