If you think world-class science lacks humor or the ability to stun, you probably didn’t attend NIH’s 33rd Research Festival, which took over most of the public space within Bldg. 10 on Sept. 11. There’s one thing the day-long celebration of intramural science didn’t include—hyperkatifeia, an extremely negative emotional state comparable to withdrawal from opioids.

“We have a whole herd of neurotransmitters in our brain that are designed to make us feel lousy—they are principally involved in the fight-or-flight response,” said NIAAA director Dr. George Koob, in the second of three plenary sessions that drew trainees—the event’s main audience—to Masur Auditorium. He said he’s been obsessed for the past 20 years with discovering why substance abusers of all stripes, from drinkers to druggers, keep bingeing when the downside of their preoccupations is so dependably miserable.

“Opioids and alcohol cause pain,” he exclaimed.

To find a term to describe this dire state, common to all drugs of abuse, Koob leaned on his brother Stephen, a Greek scholar and conservator, who provided “hyperkatifeia,” a painful mouthful that Koob hopes will catch on.

Most of the day, however, was more akin to the pleasure of discovery science, NIH’s stock in trade.

Even Koob’s talk about “deaths of despair” (88,000 people die yearly from excessive alcohol use and 14.5 million Americans are afflicted with alcohol use disorder, he said; another 2.1 million suffer from opioid use disorder) had an upside—there are compounds (corticotropin releasing factor antagonists) that show promise in reversing hyperkatifeia.

The day’s first scientific talk featured Nobel laureate (1998) Dr. Ferid Murad, an alumnus of the NHLBI intramural program (1967-1970) who gripped the edges of the podium and never looked down once as he seemingly read nearly an hour-long talk from the eyes of the audience.

“Dr. Murad told me this morning that he’s the oldest living scientist [83] studying messengers,” noted Clinical Center scientific director Dr. John Gallin, who co-chaired this year’s festival with NIDA’s Dr. Amy Newman. So it was doubly astonishing that Murad’s command of the complicated way that cells talk to one another was so seamless, comprehensive and unrelenting.

Murad shared his Nobel prize for work showing how nitric oxide relaxes smooth muscle; his research underlies the effectiveness of Viagra. Stopping often to observe how much fun it is to untangle the endless game of Telephone that molecules play with one another (and to cheer the opportunities for employment that the discovery of druggable targets offers), Murad finished with an anecdote: Doctors in Turkey are successfully using the little blue pill, combined with puffs of nitric oxide, to rescue blue babies.

In recognition of Murad’s “resilience and persistence, which are really important qualities for scientists,” NIH deputy director for intramural research Dr. Michael Gottesman then presented him with the NIH Distinguished Alumnus Award.

Exemplifying those virtues was the next speaker, Dr. Marston Linehan, chief of NCI’s Urologic Oncology Branch, who declared that his 35 years of work on kidney cancer have shown that “kidney cancer is not kidney cancer. It’s many cancers that just happen to affect the kidney. At least 17 genes cause it, so it’s at least 17 different diseases.”

Linehan and his team have studied the DNA of some 4,312 kidney cancer patients over the years and have discovered the gene for Von Hippel-Lindau syndrome (it’s an oxygen sensor) as well as several new cancers, including hereditary papillary renal carcinoma (and its cause, the MET gene) and hereditary leiomyomatosis and renal cell cancer.

“Kidney cancer is fundamentally a metabolic disease,” said Linehan “and we’ll have better therapy if we can understand the metabolic basis.”

He and his colleague Dr. Ramaprasad Srinivasan have employed several agents, including bevacizumab and erlotinib, that appear to prolong survival.

“We’re not home yet, but we’re encouraged,” he concluded.

Like Linehan, Dr. Carlos Zarate, chief of NIMH’s Experimental Therapeutics and Pathophysiology Branch, has had long experience—at least two decades—of clinical investigation, in his case, of patients suffering from depression. Since 2000, NIMH has pursued “the road less traveled”—specifically, a deep dive into the roles of glutamate and neuroplasticity in depression and suicide.

While the drug memantine, another NMDA receptor antagonist, has been explored in depression, the headline-making news has been ketamine, an anesthetic agent with very rapid action against depression (within hours) and benefits lasting up to 2 weeks with a single administration.

“It was, I must say, an eye-opener,” said Zarate of studies showing that ketamine can, within 40 minutes of intravenous administration, reduce instances of suicidal thinking for about a week. This contrasts with MAO inhibitors and other antidepressants, which can take 8 weeks to show full benefit and have low rates of remission in those who have already tried other antidepressants.

Dr. Carlos Zarate of NIMH talks about the rapid action of ketamine, a treatment for depression.

Zarate and his colleagues have spent the last 10 years figuring out how ketamine works, via “reverse engineering.” The drug has approximately 24 metabolites, and perhaps some of them bear the clinical benefits, minus the side effects, which include risk of addiction and hallucinations. The NIMH scientists, in collaboration with NIA, NCATS and the University of Maryland, are currently focusing on one metabolite—hydroxynorketamine—and will begin studies at the Clinical Center early next year.

“We are trying to separate the wheat from the chaff,” said Zarate.

Taking advantage of the finding that placebo effects are largest in patients with pain and depression, Dr. Lauren Atlas, head of NCCIH’s section on affective neuroscience and pain, with joint appointments at NIMH and NIDA, is studying how to harness the placebo effect in tandem with opioids such that dependence on the latter can be significantly reduced. Not yet tested in patients, her approach nonetheless shows promise, as it suggests an additive effect is likely.

And not that it’s going to show up in your medicine cabinet anytime soon, but Dr. Andrew Mannes, chief of the CC’s department of perioperative medicine, in collaboration with multiple institutes and principal investigator Dr. John Heiss of NINDS, had recent success with a non-opioid painkiller that can step in when cancer pain exceeds even the ability of opioids to offer relief. Like ketamine, RTX (resiniferatoxin) is “very potent, very specific and very quick,” which is especially important in the 15 percent of cancer patients for whom other analgesics fail.

RTX is not for headaches. Mannes, who has studied RTX for 10 years, called it a palliative drug that can benefit patients in severe pain with advanced illness.

Patients typically experience a reduction in pain, he said, and need far fewer opioids. “Bedridden people have been able to get up and resume some activities of daily living…It gives people a better chance of having a better quality of life.”

There are adverse effects, including urinary retention, some loss of heat sensitivity in the extremities and increased risk of irregular heartbeat. The research team is learning to manage the downsides and has recently learned that how the drug is given is as important as the dose.

Dr. Kandice Tanner (l), a Stadtman investigator in NCI’s Laboratory of Cell Biology, awaits the start of the poster session with Dr. Paule Joseph, a Lasker Clinical Research Scholar with appointments at NINR and NIAAA.

“I think today shows that the greatest strength of the NIH Intramural Research Program is its people,” concluded event co-host Gallin. “The IRP is alive and well and is thriving.” 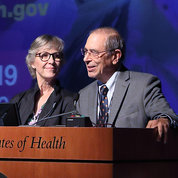 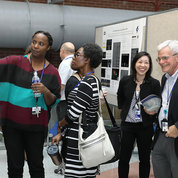 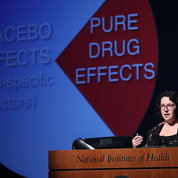 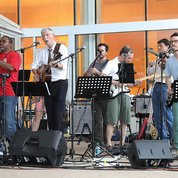 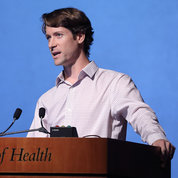 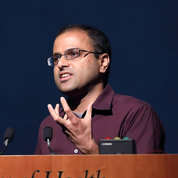 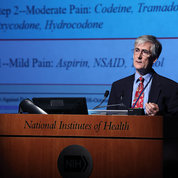