Less than a week after taking office, Vice President Kamala Harris visited NIH on Jan. 26 for the first time as VP. She was on a priority mission—vaccination against Covid-19.

“NIH scientists created something that will save your life and the life of your family and the community,” she said, after being injected with her second dose of the Moderna Covid-19 vaccine on stage in Masur Auditorium. “I want to urge everyone to take the vaccine when it is your turn. On behalf of President Biden and myself, thank you for what you do every day. The bottom line is that we’re going to get 100 million vaccinations in 100 days and we’re going to continue to do what is necessary to improve the health and well-being of our country.”

Judy Chan, a nurse practitioner in NIH’s Occupational Medical Services, administered the immunization shot. Harris had received her first dose of the vaccine in southeast Washington, D.C. on Dec. 29. Her hour-long visit to NIH—to complete the 2-part vaccination process and to record vaccine confidence public service announcements with NIAID director Dr. Anthony Fauci—was introduced by NIH director Dr. Francis Collins, who spoke of the close tie she has to the agency.

“It is our great privilege to welcome Vice President Kamala Harris and her husband, Second Gentleman Doug Emhoff,” said Collins, also on stage in Masur. “Our 40,000 NIH staff [most viewing remotely via videocast] are incredibly excited that you’re part of NIH this afternoon…[In reading up on Harris’s background], I learned to my delight that we have a generational connection between your mother and NIH.”

The late Dr. Shyamala Gopalan Harris was a distinguished breast cancer scientist funded over several years by NIH, Collins reported. She earned her Ph.D. at the University of California, Berkeley, and conducted research for many years at Lawrence Berkeley National Laboratories, among other institutions. Her work focused on the hormones progesterone and estrogen, and their effects in normal development and in cancer.

NIH director Dr. Francis Collins gives the thumbs up for Harris’s remarks about Covid vaccination, NIH’s role in developing it and the value of scientific research in general.

Gopalan Harris was listed as principal investigator/project lead from 1987 to 2001 on grants awarded by NCI, NICHD and the National Center for Research Resources. She also visited NIH frequently as a peer reviewer in the biochemical endocrinology study section.

“Growing up, all we’d know is that ‘Mommy’s going to Bethesda,’” recalled Harris, smiling. “My mother had two goals in her life—to raise her two daughters and to end breast cancer.”

Describing how highly she regards biomedical research, the Vice President said, “My first job was cleaning pipettes in my mother’s lab…I grew up around science. [It was] taught to me by someone who was so profoundly passionate about a gift, which is what scientists give to us. Their whole reason for being is to see what can be, unburdened by what has been. Their whole reason for being is to pursue what is possible for the sake of improving human life and conditions. It is such a noble pursuit. And the importance of NIH is that it’s an essential function of government—to provide for the public’s health.”

In brief remarks, Collins pointed out that the Moderna vaccine administered to Harris had been developed initially at NIH’s Vaccine Research Center, which is located a couple hundred yards across campus from the auditorium. In addition, he noted, some of the first clinical tests for safety and efficacy had been conducted in the very building where the afternoon’s visit took place—the Clinical Center, or “the House of Hope” as some call it.

“We’re proud to have you here to say a few words about how NIH has played such a central role in responding to this Covid crisis, which sadly now has taken more than 420,000 [U.S.] lives,” Collins said. “We’re working every day to come up with ways to further limit that toll.”

He noted that approximately 23 million people had been immunized already nationwide, at the rate of about a million per day. “And we want to get that number up even further,” he added. “Thank you, President Biden, for encouraging that stretch goal. [The vaccine’s] not all that NIH has been engaged in. We’re also deeply involved in developing and testing therapeutics. We’ve made considerable progress with monoclonal antibodies. [NIH also is studying and devising novel coronavirus] diagnostics and new technologies. [Those would] make it possible to have at-home testing for this particular virus. That would be a great opportunity, especially as we’re trying to get kids back in school, which I know is a big priority [of the Biden administration].”

Acknowledging the dedication and commitment that scientific research demands, Harris ended by saluting NIH’s mission and all those who carry it out.

“The work that goes on here has one goal—to improve public health,” she said. “The importance of the work that happens at NIH is that it’s not about the profit; it’s about the people. I say to everyone who works here: I know you. I know who you are. I know what you do. I know you work around the clock with those experiments that have to be checked on every few hours and they don’t care what time is on the clock. I know the work you do and the collaboration that is required. I know the work you do reviewing grants, because of course some of the most significant scientific research has been publicly funded.

“I have the luxury of being here at this moment on just the [sixth] day of our administration—coming full circle, because NIH was such a huge part of my youth—to say thank you for all you’re doing.” 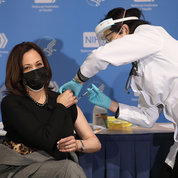 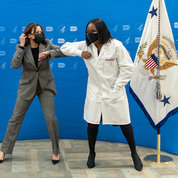 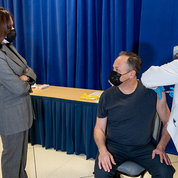 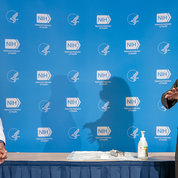 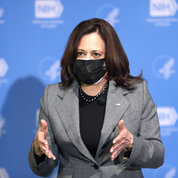 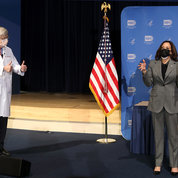