“Happy Pride!” said Adm. Rachel Levine, HHS assistant secretary for health, greeting a hybrid audience in Wilson Hall on June 22. After a full morning of meetings with NIH leadership, Levine was the featured speaker at an event titled “Together Towards Discovery: How Our Intersecting LGBTQIA+ Identities Impact Our NIH Work.”

The event also featured a panel discussion with members of Salutaris, an NIH organization dedicated to making the community open and welcoming to all sexual and gender minorities (SGM).

NIH’s 2022 Pride Month theme was “Together Toward Discovery.” Events placed special emphasis on intersectionality and its influence on visibility in the workplace. Intersectionality is a term that refers to the social categorizations—such as race, class and gender—that make up an individual’s identity.

Speaking to a small in-person audience of allies, as well as several hundred attendees via videocast, Levine commended NIH for its dedication to diversity, equity and inclusion (DEI).

“Please know that your work in [DEI] and through your efforts to welcome and celebrate diversity, you are making a difference,” she noted.

Levine, who is also a physician specializing in pediatrics, expressed excitement for NIH’s 2021-2025 Strategic Plan, which includes plans to enhance research on the health and well-being of sexual and gender minorities. NIH also aims to increase data collection on sexual orientation and gender identity (also referred to as SOGI data).

This attention to DEI is not just specific to NIH, Levine said, but is a “whole government approach…We have [people in office] who see us, who support us and affirm us just as we are…[and] we have not made progress unless we have made progress for everyone.”

She referenced the recent Executive Order Advancing Equality for LGBTQI+ Individuals, signed by President Biden in honor of Pride Month, which took steps to protect LGBTQI+ children and their families. The needs of our nation are diverse, Levine said, and our current administration believes in “an inclusive approach to governing which gives people a voice.”

Ensuring LGBTQIA+ employees have equal opportunities and can reach their full potential “is essential to the NIH mission,” said NIH acting director Dr. Lawrence Tabak. Several event panelists who are researchers at NIH shared their experiences as LGBTQI+ individuals. While they had not experienced discrimination at NIH as a result of their identities, the fear of discrimination was present in all of their stories.

“I wish that we…don’t have to ‘come out’ every single time,” said Tam Vo, a third-year postdoc at NCI. Even if your workplace is accepting, “you shouldn’t need to come out [when it’s just who you are].”

Brandon McCullough, a supervisory workforce development analyst with All of Us, said he benefitted from seeing the progress made by the DEI and SGM offices when he was first starting out at NIH in 2015.

“When I saw the work that had already been done…that created a safe space for me,” he shared. “I never felt like I needed to come out to anyone because I worked at an agency where it was quite fine for you to be whomever you were going to be.

“And that just speaks to the work NIH continues to do,” he added.

Other panelists spoke about the importance of community and allyship.

“It’s a whole matter of using what you have to advance the general good,” explained Michelle Boyle, special assistant to the director/deputy director, NIH Office of Budget. She credited two colleagues who were already “out” with assisting her as she prepared to transition in 2013.

“Having allyship within our workforce is essential,” noted NIAID senior investigator Dr. Karin Peterson. Allyship is plentiful within the Rocky Mountain Laboratories community, she said, and that sense of acceptance can be particularly important if the surrounding community is less welcoming.

Vanessa Morgan of NIMH said she appreciated when workplaces “make [their] acceptance more visible…[it’s] less of a mystery you have to decode.”

Representation was another topic of discussion among the panel. Having a supportive community is important, but it is just as meaningful (if not more so) to see diverse individuals represented in all levels of management.

“When you see Admiral Levine in such a high position in government, it gives the community something to aspire to,” shared Shyam Patel, communications director for the Sexual and Gender Minority Research Office. “To see that representation in government at every level is just crazy to me, but in the best way possible.”

Levine’s schedule did not permit her to stay for the panel discussion, but her parting words assured her audience of her—and the federal government’s—commitment to DEI.

View the archived lecture at https://videocast.nih.gov/watch=45702. 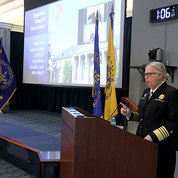 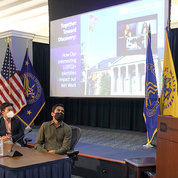 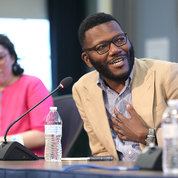 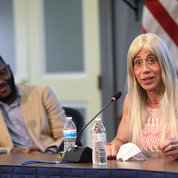 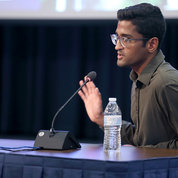 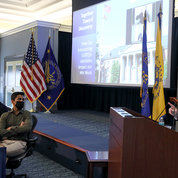