The 37th NIH Institute Challenge Relay (and vendor fair) made a triumphant return on Sept. 21 after a 2-year pandemic hiatus.

Eighty teams registered (up 10 from 2019’s 70 teams), proof of “not only how popular this event is, but also how important it is for morale and how much it was needed for everyone involved,” said David Browne, event organizer and co-president of the NIH Recreation & Welfare Association.

Two-time defending champions Worktime’s Over yielded their crown to The PCR: Postbac Chain Relay. This year’s winners blazed across the finish line with a final time of 14:59, with second-place finishers Follow the LDDR one second behind in a down-to-the-wire battle. My Gel Runs Faster Than Yours took third, and Worktime’s Over won their heat but ultimately finished fourth overall.

The race was split into 2 heats this year. Five-member teams with a variety of gender representation ran the half-mile loop around Bldg. 1. Runners started on Center Drive, then turned right to ascend South Drive, and finished on a downhill over Memorial and Center. The final runner on each team had another brief uphill climb at the end, turning into the driveway between Bldgs. 1 and 2 for the grand finish.

NIH Police directed traffic to keep runners safe, but one type of unforeseen obstacle was left behind by the campus geese. “The goose poop [on the road] was an extra variable,” joked Michael C. of team Engine X.

“NIH employees understand the importance of staying active and having fun while doing so,” Tabak said.

He also recognized the competitive nature of some of the runners. “No pressure, but I’ve seen some of the teams here practicing on weekends,” he quipped.

As always, team names and costumes were the highlight of the event, with standouts such as The Golden Girls (in brightly colored wigs), On Your Marmoset…Go! (wearing monkey-ear headbands) and Smooth Operators (clad in surgical scrubs).

This year’s winning team had representatives from 5 ICs: team captain Nicole Hsiao-Sánchez of NICHD, and members Madalyn Jones (NIAID), Andrew Cook (NIDDK), Marcel De Jesús (NIAAA) and Will Rich (NCI). The team practiced together for several weeks leading up to the event, said Hsiao-Sánchez, “finish[ing] our respective experiments at our labs, and still show[ing] up to practice after a long day of work.

“As young scientists in training, our team epitomized the spirit of collaboration that is the foundation of great science.” 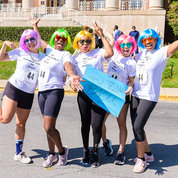 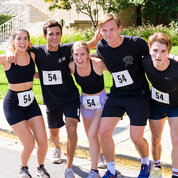 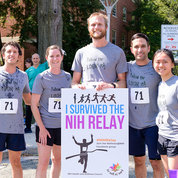 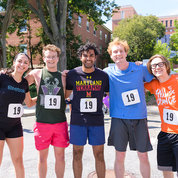 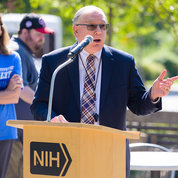 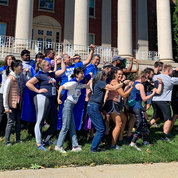 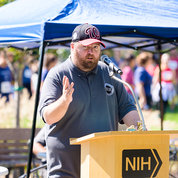 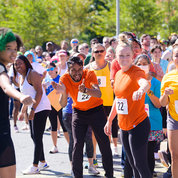 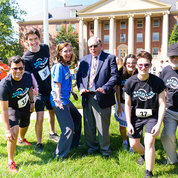 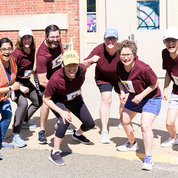 NLM’s National Center for Biotechnology Information fielded at least six teams, all running in memory of NCBI engineer and longtime NIH relay enthusiast Alexey Iskhakov, who passed away on Apr. 13.

“Alexey was a tireless supporter of NCBI’s participation in the NIH relay,” recalled NCBI staff scientist Colleen Bollin, technical program manager of the Information Engineering Branch’s Sequence Archives and Submissions Program. “He recruited new runners by showing up at the desks of newly arrived staff and asking them to join, frequently bribing them with candy to get them to give it a try even if they didn’t consider themselves runners. He would contact runners from the previous year and convince them to run in the current relay.

“Sometimes people formed their own teams, but often Alexey would build new teams from his list of recruits, building friendships between people from different parts of NCBI. Alexey would register as many teams as he could and maintained a list of alternate runners for the frequently occurring situation where runners had to drop out due to illness or injury. Alexey also recruited photographers to capture the race. Every year, Alexey organized two practice walks through the race course, during which he distributed candy and gave out tips for how best to run the course.

At left, Iskhakov cheers on fellow NCBI’er Myra Derbyshire, who was running for a different NCBI team circa 2010. At right, the NCBI banner has a long history too.

“On the day of the race, he gathered the runners, photographers and spectators, handed out more candy and guided the group to the race course. After running his own lap, Alexey would often run part or all of the lap with the other members of his team, encouraging them and cheering them on, and then go on to run with any other NCBI runner that he could find, cheering them on as well.

“After the race, Alexey handed out even more candy and helped people collect the T shirts that were the usual participation prizes,” she continued. “Alexey also coordinated the sharing of photos after the race and shared the results.”

Iskhakov also was known for running under colorful team names. In 2007, he and teammates entered as “Supersonic Pancakes” but could not recall the origins of the moniker.

“There were two Russian women who formed a whole Russian team that consisted of Russian-speaking people from the former USSR,” he had said, when asked by the NIH Record. “I do not know how they invented that name. I think that it is better to ask them about it…Seems that ‘pancakes’ is a free translation of the Russian word ‘bliny’—Russian-style crepes.”

Over the years Iskhakov made valuable contributions to multiple NLM/NCBI projects including development and maintenance of Links and History systems for Entrez, VDB storage system and most recently SRA processing pipeline.

“We remember Alexey as a highly competent engineer who was well respected by his colleagues and who helped his teams to solve many challenging problems,” said Dr. Stephen Sherry, NLM/NCBI acting director, in a note about Iskhakov’s passing. “Alexey was highly dedicated to the NCBI mission and team and never made compromises to do the things he believed in. He will be missed.”