‘Economy of Expression’ for Icon

Fauci Bids NIH Farewell After Half Century of Service

Dr. Anthony Fauci (r) receives a standing ovation as he bids farewell after more than 50 years at NIH.

How do you thank someone who has devoted more than 54 years to pursuing medical science, combating infectious disease and promoting public health—particularly when the honoree has declined all bells, whistles and elaborate celebrations of any kind? That was NIH’s challenge on Dec. 16, when an extremely modest assembly gathered in Wilson Hall—one of the campus’s smallest venues—to pay tribute to an agency icon.

Dr. Anthony Fauci, set to retire from the agency he had served continuously since 1972 (and as a clinical associate from 1968 to 1971), and a few dozen of his dearest friends and colleagues came together for the only farewell event he wanted: “a straightforward, no-nonsense observance of one of the most momentous occasions in NIH history,” said Dr. Lawrence Tabak, performing the duties of NIH director, who offered remarks “from one Brooklyn kid to another.

“Tony, you’ve been a constant source of knowledge and inspiration at NIH for so many years—no matter what has been thrown at us. No matter how spectacular a sendoff, none of us could adequately express our gratitude for what you’ve given us, what you’ve given the world, for more than a half century.”

In turn, Fauci would hear from a select few he identified: “closest friend” Dr. John Gallin; “professional soulmate and chief confidant” Dr. Cliff Lane; comrade through the pandemic, former NIH Director Dr. Francis Collins who Fauci said he was honored to “partner on a historic tenure as NIH director”; and the “love of my life,” wife Dr. Christine Grady.

“Tony’s an extraordinary physician,” said Gallin, who met Fauci in 1972 outside their respective NIH labs. “What makes him a great physician? First, his incredible work ethic—undoubtedly acquired from his parents and Jesuit education. His remarkable intelligence, knowledge of medicine and impeccable clinical judgment all contribute to him being a great doctor. But his success also is because he relates to people of all backgrounds…He’s a great listener and talks to people—not at them. He can keep a secret. He tells his patients, his friends and those he advises what they need to know—not necessarily what they want to hear.”

Lane said Fauci, his boss of the last 40 years, is what is known in medicine as an “All Star, greatest-of-all-time, triple threat as evidenced by his extraordinary skills as one, a clinician; two, a researcher; and three, a teacher…in other words, to use a sports analogy, he has been Michael Jordan, Babe Ruth, Tom Brady, Wayne Gretzky and Pele, all in one.”

“[Even before the historic global health crisis] Tony was world renowned for his non-stop work ethic,” said Collins, who recalled finding himself in January 2020 “riding shotgun with a man on a mission, facing the deadly Covid-19 pandemic. The world had the extremely good fortune of having Tony Fauci in the driver’s seat…I witnessed him throw it into overdrive…Throughout our hundreds of hours together, month after month, he never lost sight of the goal—to save people from this pandemic—and he never lost his humanity.”

Grady talked about what NIH means to Fauci from her vantage point.

“NIH is embedded in Tony’s DNA,” she observed. “I think the reason NIH is part of Tony is because of how much he loves and admires what the NIH is about…He loves the mission, the cutting-edge science, the intense efforts to improve life and health for the people the world over. Perhaps most important, he loves the people at NIH. You, NIH’ers, are Tony’s people.”

In March 2021, Fauci (l) teamed up with his ally throughout the pandemic, then-NIH Director Dr. Francis Collins (c), and NIMHD Director Dr. Eliseo Pérez-Stable at the National Cathedral in Washington, D.C. to encourage Covid-19 vaccination in the faith community.

Following the strict three-minute testimonials, NIH Acting Chief of Staff John Burklow joined Fauci on stage to talk about his career. Topics ranged from how he decided to become a physician to facing confrontations by AIDS activists in the 1980s to his philosophy on leadership to consulting seven U.S. presidents on public health to his advice for communicating science to the public.

“Precision of thought and economy of expression,” Fauci suggested. “Know what your message is and say it in as few words as possible. Know your audience. The goal of your communication is not to show how smart you are, but to get people to understand what the hell you are talking about.”

Attended by members of Fauci’s lab, NIAID’s Laboratory of Immunoregulation, and staff of his administrative office as well as such science and medicine luminaries as former CDC Director Dr. Julie Gerberding and Nobel Laureate and former NIH Director Dr. Harold Varmus, the event—an “economy of expression” in reality—ended with brief comments from the honoree.

“I am sad to leave this extraordinary institution,” Fauci said, “but I actually savor and relish the scope, depth, breadth and always amazing and challenging experiences I have had over the last 54 years.”

As he prepares to drive away from the NIH campus for the last time as a staff member, he said he is as much or more in awe of it as he was the first time.

“That speaks volumes about the place,” he noted. “I feel deep-seated gratitude and appreciation having been given the opportunity to be part of this organization and to have made some degree of contribution to domestic and global health in the multiple roles that I have been privileged—and I do mean privileged—to play as a scientist, a clinician, a clinical investigator, an institute director and ultimately a policymaker. This is the only place in the world where I could have had the opportunity to do all of this.”

In an open chat with Burklow, Fauci reflects on his career at NIH.

In the interview, Fauci said the next phase of his career and life would be devoted to using his wealth of experience to encourage the next generation of young people to pursue science as a career and to urge those already in science to add elements of public service to their repertoire.

He concluded by putting his mixed emotions regarding retirement in context. “The sadness I feel about leaving is truly strongly balanced by the energy and excitement I feel about what lies ahead for me in the next chapter.”

NIH’ers can view the archived event at: https://videocast.nih.gov/watch=48728. 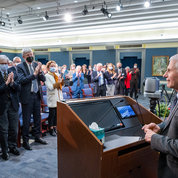 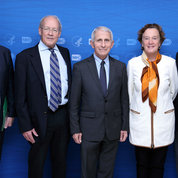 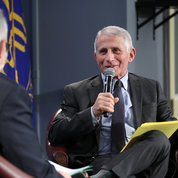 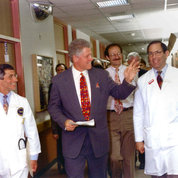 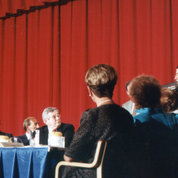 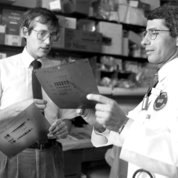 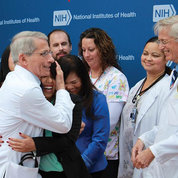 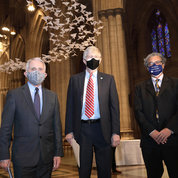