In the underground passageway, representatives from several organizations that were instrumental in concept and construction of the MD 355 Crossing Project gather for a photo in front of one of two murals.

The event marked completion of the MD 355 Crossing Project, which was part of the Department of Defense’s Base Realignment and Closure (BRAC) process.

Before pandemic safety measures reduced traffic in the area, 1.5 million pedestrians were estimated to cross MD 355 every year. The intersection at Rockville Pike and South Drive, where the Metro station is located, sees particularly heavy vehicular traffic—especially during rush hour—with transit, commuter and shuttle buses as well as cars, vans and other automobiles traveling to either medical facility. Getting from one side of the roadway to the other had been a safety concern for decades. The new passage opened in September 2021.

“This passage, now named ‘Phil Alperson Way,’ will provide safe crossing for [thousands] who traverse the very busy MD 355 between two great American institutions…and connect to the Medical Center Metrorail station,” Van Hollen said at the dedication, staged under a tent near the tunnel.

“During my time serving in the House of Representatives, Phil was my legislative director. He shared in my belief that government can deliver meaningful results for our community and he fought to uphold our promise to provide world-class medical care to those serving our country in uniform. Phil helped me secure the federal funds to make it happen and then became the head of the Montgomery County government group that implemented the plan. As a result, our men and women in uniform will be able to more easily access the care they need and the dedicated federal employees who care for them can get to work more easily and more safely…Phil’s legacy of public service and his commitment to our men and women in uniform will live on, not only through the completion and dedication of this project he helped make a reality, but through his family, friends and colleagues who carry his spirit and commitment to ‘The Alperson Way’ with them each day.”

In addition to the underpass, the crossing project also included roadway and surface improvements such as a traffic signal, pavement resurfacing, sidewalk/bike path, median work and storm water management.

Construction of the complex passage took more than 5 years and includes new 120-foot-deep high-speed elevators, emergency stairs creating direct access between the Metro station and the east side of MD 355 and a new elevator and staircase between the existing Metrorail platform and mezzanine level.

One side of the mural in the underpass highlights NIH's mission. 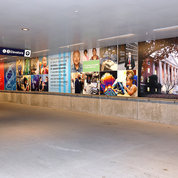 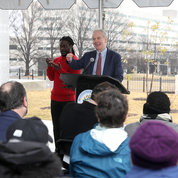 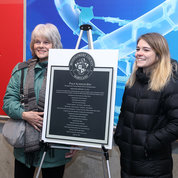 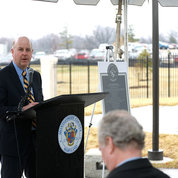 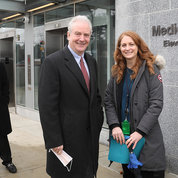 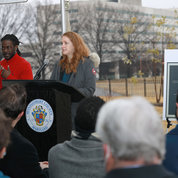 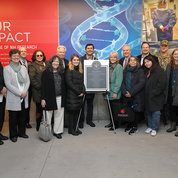 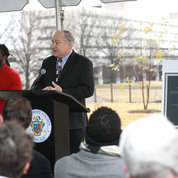 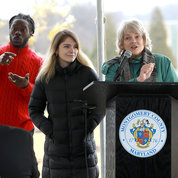 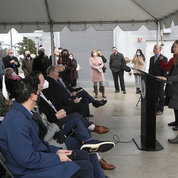 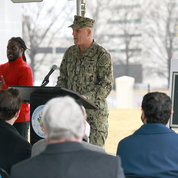 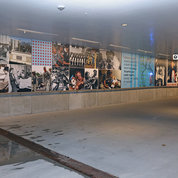