NIH is accustomed to its trainees rising to super success after leaving, but Zion Johnson took it to a whole new level recently. The Los Angeles Chargers selected the former NIH Pathways intern and First Team All-American offensive lineman as their first round pick (number 17 overall) in the 2022 National Football League draft. It might have been the childhood dream come true for a lot of youngsters, but Johnson wasn’t exactly thinking that way as a kid.

“I didn’t start playing football until late in high school—my junior year,” said Johnson, who grew up in Bowie, Md. “I worked at NIH and I was more focused on trying to be an engineer.”

In fact, golf was Johnson’s sport in his early years at Riverdale Baptist School in Upper Marlboro, Md. A bus driver who drove Johnson home every day after golf practice suggested he try football.

“He was always saying, ‘Hey, I think you should try out for football—even if it’s not something that you like or that you get really good at…It’s something that’ll teach you qualities like teamwork and discipline.’ At first, I was skeptical, because I had not played football before and the other guys on the team had a lot more experience.”

Johnson worked at NIH as an intern.

Johnson recalled not being a particularly large or strong kid physically. Nor was he consumed with the sport.

“I wasn’t as big as the other guys that played my position,” he said. “But I think [the bus driver] saw something…I had big hands and long arms, so maybe he thought if I could get in the weight room and develop, I could end up being a pretty good football player. I was a fan of the Pittsburgh Steelers. I would watch games, but it wasn’t a big thing in my life.”

The bus driver’s suggestion resonated with Johnson, but it was another influencer who made the difference.

“Really, it was my mom who pushed me to play,” Johnson recalled. “Over the course of a few days, she basically told me, ‘You should try it, because you don’t want to look back and have regrets.’ And definitely I look back now and I’m glad I made that decision. Because I think I truly would have regretted not taking the chance.”

At first, Johnson didn’t appear to be a natural on the football field.

“I struggled a lot very early on,” he said. “I didn’t really [get into any games] until the end of my junior year. But I really fell in love with it—with the ability to just work hard and do what your coaches said, and ultimately see yourself develop and get better over time.”

Pathways intern Johnson and his colleagues present their project to an ORF audience.

At about the same time he was contemplating the jump from golf to the gridiron, Johnson was already mapping out his engineering future.

As a youngster, he had visited NIH with his mom, Tammie Edwards, former creative director and chief of the Medical Arts Branch in the Office of Research Services and, since May 2021, director of the ORS Division of Amenities and Transportation Services.

“My mom always worked at NIH when I was growing up and I’ve always loved going to work with her, seeing how she interacted with her staff,” Johnson remembered. “When I got to eighth grade or so, sometimes I’d come in and help my mom by answering the phones. I always thought that was great because it felt to me like I was doing something productive.”

Years later, Johnson applied for and secured an NIH Pathways Program internship with the Office of Research Facilities. He was assigned first to the Division of Facility Stewardship.

“We would survey buildings, get the dimensions of rooms and build the rent models in AutoCAD,” he explained.

Johnson (No. 77) played football for two schools--Davidson and Boston College--during an outstanding college career, which garnered scholastic honors as well as athletic acclaim.

“The page that I worked on will show the critical temperature, flow and pressure of the boilers, gas turbine and chillers,” Johnson explained. “That’s important because workers at home need to be able to see these real-time operational data. If something were to go wrong, they might have to rush in and work at the power plant, even outside of working hours. That was really my first experience in a computer science environment.”

After transferring to Boston College to take advantage of both an athletics scholarship offer and the school’s reputation for outstanding academics, Johnson graduated in 2020 with a bachelor’s degree in computer science. He had been deemed Offensive Linesman of the Week three times and was named to the All-Atlantic Coast Conference team. He completed his final Pathways assignment late that year too, as the world had plunged firmly into pandemic mode.

In 2021, Johnson earned his master’s in cybersecurity along with first team All-ACC honors and numerous other academic and sports accolades.

By April 2022, he found himself seated in a deluxe Las Vegas venue, hearing his name called in the first round of the NFL draft and accepting an LA Chargers jersey on live TV.

“I think I still haven’t realized it yet because I’m moreso just focused on what’s next and what I need to do to sustain myself at the next level,” he said. “But it’s definitely a story you don’t hear very often.” 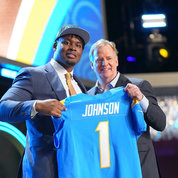 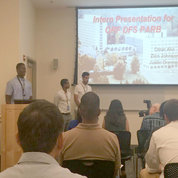 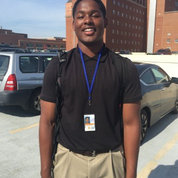 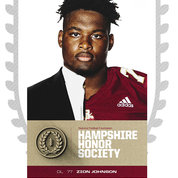 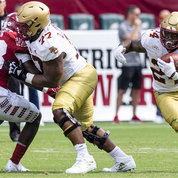 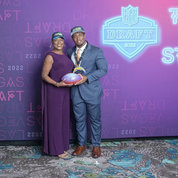 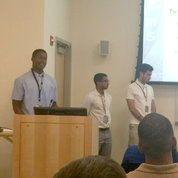