After 2 years on a course behind the Clinical Center, the 36th NIH Institute Relay returned to its traditional site in front of Bldg. 1. The change in location did not impede last year’s winners, who repeated their victory again this year.

On Sept. 18, Worktime’s Over won the relay for the second year in a row with a time of 14:44. Their name will be engraved once again on the Allen Lewis NIH Memorial Trophy in the Bldg. 31 Fitness Center. High Mobility Group J finished second in 14:51 and Non-Shivering Thermogenics came in third at 15:22.

Worktime’s Over featured three new runners, according to team member Andrew Gravunder, a research engineer in the Clinical Center’s rehabilitation medicine department. He recruited the same way he did last year, by finding runners who are hard workers—those who are “first in the building and last ones out.” In 2018, the team didn’t have time to warm up because they were busy working. It was the same this year.

Next year, the team hopes to compete for the trophy again, although they will be without their anchor leg for the past 2 years, the “irreplaceable” Matthew Short.

“It was so much fun to meet and run with other NIH personnel. Everyone had such great spirit and came out to work hard, which is standard at NIH,” Gravunder said.

Before the race, NIH director Dr. Francis Collins addressed the crowd. He noted, “We are the National Institutes of Health. We care not only about the nation’s health but also the health of everybody who works here.”

NIH director Dr. Francis Collins blows his whistle, starting heat 1 of the 36th NIH Institute Relay. He is flanked by Colleen McGowan, ORS director, and David Browne of the R&W.

And with that, Collins blew his whistle, officially starting the race. The crowd roared as the runners took off and cheers continued as the teams ran laps around Bldg. 1. Later, ORS Director Colleen McGowan whistled the start of the second heat. “It’s great to see all this camaraderie,” she said. Then, the NIH Recreation and Welfare Association’s David Browne reminded runners of the rules. The first four runners each complete a half-mile loop around Bldg. 1 then hand off the baton to the last runner in an exchange area near the starting line. The final runner on each team must run the loop and then turn right at a chute to the finish line on the driveway between Bldgs. 1 and 2.

The race was held in front of Bldg. 1 for the first time since 2017—good news for the last runner of each team. At the previous course near the CC’s south entry, runners faced a steep incline as they sprinted toward the finish. Browne said construction around Bldg. 1 finished in 2018, allowing the race to move back. Although the Bldg. 1 course is flatter, it’s longer than the course near the CC, so time comparisons might not be significant.

This year, 76 teams participated in the relay, according to Browne. Once again, the team names were a highlight of the day. Titles included the Flu Fighters, Heart and Sole, The Eyes Have It and the INNcredibles.

The relay was sponsored by the R&W Association and ORS’s Division of Amenities and Transportation Services. 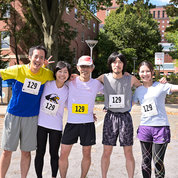 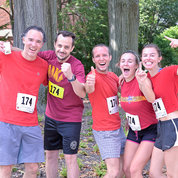 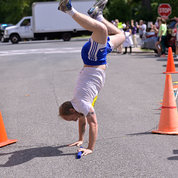 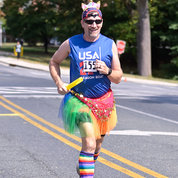 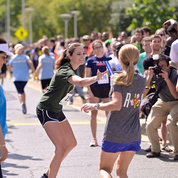 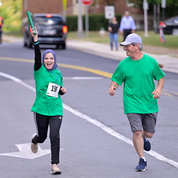 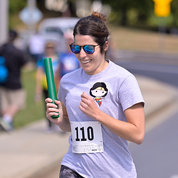 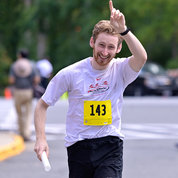 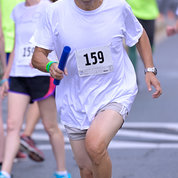 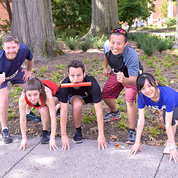 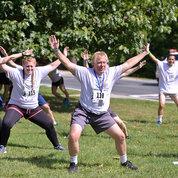