An anniversary—especially a milestone one—invites us to reflect on the past, examine the present and envision the future.

NCCIH staff, a group of researchers and a public audience did just that at the center’s 20th anniversary symposium, “NCCIH at 20: A Catalyst for Integrative Health Research,” held recently in Lipsett Amphitheater.

“I think it’s fair to say that at 20 years old, NCCIH has proven itself to be an incredibly valued and important member of the NIH family,” said NIH director Dr. Francis Collins in his welcoming remarks. “The momentum is unstoppable and it’s wonderful to see as an evolutionary process.”

In 20 years, the center has grown from a handful of employees in a couple of rooms to 68 FTEs (and additional part-time and contract staff) and a budget of $146.473 million in fiscal year 2019.

Dr. Helene Langevin, NCCIH director, recalled, “Twenty years ago, I was one of the first grantees to be funded by what was then NCCAM: to build a robotic device to measure the tissue forces that occur during acupuncture needling. It turned out that the tool was very helpful to perform experiments and gave us a lot of information about what happens biomechanically in tissues when you insert a needle. If NCCIH had not taken a chance and funded a project that may have sounded unusual to some, I would not be here today.”

Langevin chats with former Sen. Tom Harkin before the symposium. He was an early patron of what has become NCCIH.

According to a federal survey, Americans spend more than $30 billion per year on complementary/integrative approaches to improve their health, manage chronic-disease symptoms and/or counter medication side effects. However, evidence on the safety and efficacy of those practices has been limited. The symposium illustrated NCCIH’s role in expanding understanding of these interventions so that patients, health care providers and the public can be better informed about them.

The day began with the annual Stephen E. Straus Distinguished Lecture in Complementary and Integrative Health, which honors NCCIH’s founding director. Dr. Lorimer Moseley, inaugural chair in physiotherapy and professor of clinical neurosciences at the University of South Australia, spoke on “Why We Need a Pain Revolution: From Science to Practice.”

Moseley discussed several of his studies. One area, for example, is the distortion of body image that can occur when people have pain, especially chronic pain. His team “aims to innovate, test and implement new solutions that will reduce the likelihood of getting pain, or [assist] recovery.” It is important for clinical work and research to inform each other, he noted.

Moseley also works to bring pain clinicians, researchers and patients together to address common misconceptions about pain and share the science as well as clinical recommendations. He founded and leads Pain Revolution, a grass-roots, capacity-building movement in Australia to bring access to knowledge, skills and support to all in pain.

“We aim to give people an understanding of the tip of the iceberg [and of] some core principles such as ‘It’s safe to move. Motion is lotion,’” he said. “If people learn a new way of thinking about pain, the long-term benefit appears to be substantial. Imagine if a patient with musculoskeletal pain asked a clinician, ‘Can you teach me what’s going on in my body and help me negotiate this recovery as quickly as I can?’ instead of ‘Can you give me a drug to take away this pain, or [do] surgery?’...We think consumers have to drive this change.”

Next, nearly a dozen early-stage investigators, including three from NCCIH’s intramural division, discussed their NCCIH-supported work in a lightning round.

One of NCCIH’s major interests is understanding the biological mechanisms of pain; identifying effective, nonpharmacologic approaches to reduce its duration and intensity; and improving its clinical management. A panel explored the topic within the military and veterans communities and their health care delivery systems, through the NIH-Department of Defense-Department of Veterans Affairs Pain Collaboratory, which is led by NCCIH.

The center also has a role in other trans-NIH efforts such as the Sound Health Initiative (studies of music’s intersection with the brain in relation to health and disease); the Brain Research Through Advancing Innovative Neurotechnologies (BRAIN) Initiative; and the Helping to End Addiction Long-term (HEAL) Initiative. Of HEAL, Collins noted, “We won’t end addiction long-term unless we have other alternatives for people who suffer from pain, that don’t lead down this terrible path towards addiction. NCCIH is [positioned] right in the middle of that.”

The second panel discussed natural products. NCCIH programs in this area include a Center of Excellence for Natural Product-Drug Interaction Research and the Centers for Advancing Research on Botanical and Other Natural Products (CARBON) Program (the latter cosponsored with the Office of Dietary Supplements). For example, CARBON researchers recently identified two chemicals in grapes that could significantly reduce depression-like behaviors in mice, and do not target the same systems as current antidepressants. NCCIH efforts getting underway include studies of cannabinoids in relation to pain and of cytisine, a natural product used in some countries to aid smoking cessation.

In closing reflections, Langevin introduced a concept the center is developing—“Whole Person Health”—that looks at the bi-directional continuum of health as it moves from a healthy state to pre-disease to disease. Also of interest is how NCCIH might inform interventions at different stages of the continuum to restore health.

“So far, there’s not a lot of work on health restoration: how does one get back to health after having been sick, or having had a relapse of a chronic condition?” she asked. Bringing this model into the discussion as NCCIH begins to develop its next strategic plan could inform a shift in the portfolio toward more research in health promotion and disease prevention.

The full symposium can be viewed at https://videocast.nih.gov/Summary.asp?Live=33411&bhcp=1. 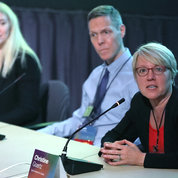 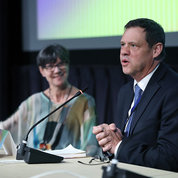